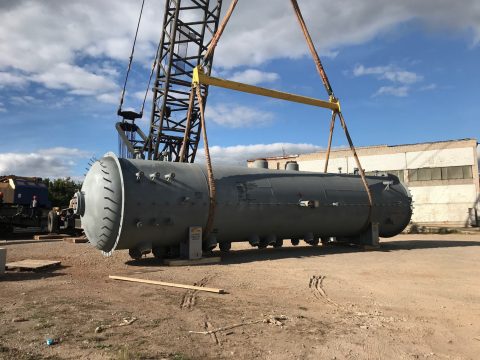 PRESS RELEASE – Barrus Projects has completed the transport of several oversized cargoes for Alexander Global Logistics to the site of JSC Taneco in Nizhnekamsk in Russia.

Barrus Projects was responsible for loading and transportation of cargo from St. Petersburg to the site of JSC Taneco in Nizhnekamsk. The transport consisted of three lots.

The first lot consisted of pipes and was shipped in four 40′ containers from Eberswalde to St. Petersburg, where it was loaded onto rail wagons and moved to the job site in Nizhnekamsk.

The second lot was a heat recovery exchanger, manufactured by German Borsig. The unit measured 14 by 3 by 3.7 metres and weighed 84.5 tonnes. The third lot, a 76.3-tonne steam drum, was delivered from Bucharest in Romania to St. Petersburg. Both of these cargoes were also moved to the job site by rail, once offloaded in the Russian port.