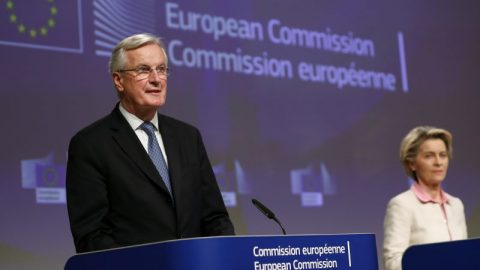 Negotiators from the European Union and the United Kingdom have reached an agreement on their future trade relationship. Both the EU and the British government announced this on Thursday afternoon.

President of the European Commission Ursula von der Leyen speaks of a “nice and fair deal”. British Prime Minister Boris Johnson is also celebrating the trade deal for the post-Brexit period as a victory. On Twitter, he posted a photo of himself on Thursday afternoon with his hands in the air cheering. “The deal is done”, he wrote.

At the same time, von der Leyen warned that instruments have been built into the deal to enforce compliance with the agreements made. For example, parties on both sides of the Channel can impose quotas or import duties on each other if the agreement is violated.

EU chief negotiator Michel Barnier was especially relieved that an agreement has been reached, which now has to be assessed by EU member states and the European Parliament. “The clock is no longer ticking”, said the Frenchman, calling the agreement unparalleled. He pointed out that new agreements on trade, aviation, innovation and climate change were made in a short time. At the same time, he is disappointed that the United Kingdom did not want to make any agreements on coordinated foreign policy, defence and development aid for the time being.

EU President Charles Michel calls the trade agreement between the European Union and the United Kingdom a major step forward in establishing a close relationship between the EU and the UK. But he adds in a statement that the process is not over yet. “It is now up to the European Council and the European Parliament to analyze this negotiating agreement before giving the green light”, he said.

Boris Johnson said he is “delighted to have signed the largest trade deal to date, worth £ 660 billion a year” and speaks of a “comprehensive Canadian-style free trade agreement.” It has been agreed that no trade tariffs will be imposed.

He stressed that the deal will help secure UK jobs. British companies will soon be able to trade more with the European Union than currently is the case, Johnson said. He also pointed out that there is a clause in the agreement that allows both parties to set trade tariffs at some point, in case a disagreement arises about the level playing field for companies. The UK Parliament will vote on the deal on December 30.