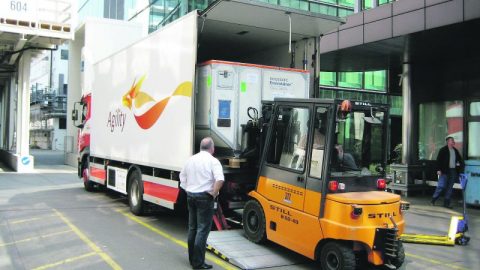 DSV has acquired the Kuwaiti freight forwarder Agility Global Integrated Logistics (GIL) for 3.5 billion euros. The takeover comes as a surprise. It was expected that DSV would press the pause button on major acquisitions after buying Panalpina two years ago, but this clearly is not the case.

A striking detail in the new takeover is that Agility was DSV’s major opponent in the takeover battle for Panalpina in 2019. In addition, Panalpina’s Swiss management had wanted to take over the company together with Agility. Ultimately, the sizeable bag of Danish kroner proved to be decisive for Panalpina shareholders.

DSV is financing the new multi-billion dollar deal entirely with its own shares, which means that in addition to a large Swiss shareholder (Ernst Göhner Stiftung with 11%), it now also has a Kuwaiti major shareholder (8%). The price roughly corresponds to the annual turnover of Agility.

In concrete terms, the Agility purchase means that the Danish freight forwarder, which also took over the American UTi Worldwide more than six years ago, will add about 3.3 billion euros to its turnover and with more than 18 billion euros, will be in the global top three of freight forwarders behind market leader DHL and Kuehne + Nagel. DSV will soon have more than seventy thousand employees, with Agility supplying about seventeen thousand of them.

Through the acquisition, DSV will increase its annual container volume by 600,000 teu to 2.8 million teu, while the air cargo volume will increase by 300,000 tonnes to 1.6 million tonnes. The Danes add substantial business in the field of contract logistics through the acquisition of Agility GIL’s real estate and warehouse activities. The company manages some 1.4 billion square meters of warehouses around the world, particularly in the Asian growth markets.

According to financial chief Jens Lund of DSV, the initiative for the purchase was taken by the Kuwaiti company itself, although there were rumors a few years ago about a possible purchase by the Danes. “They wanted to become a shareholder in DSV.” It would have become clear to Agility after the lost purchase of Panalpina that it lacked the scale to be able to play a part in global logistics for the long term, Lund said. “While DSV was already in fifth place in the world, Agility was good for place 21. Together we will soon be in third place.”

The purchase has yet to be approved by the shareholders and the competition authorities.