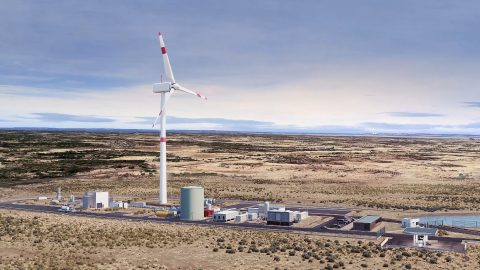 New supply chains will have to rise all over the world in order to cater to the development of renewable energy projects. These projects will no longer be built based on the need, but on the availability of resources.

One of such projects is the Haru Oni project in Chile, being developed by Siemens Energy. Kuehne+Nagel has been selected to organise the offshore project logistics for the power-to-methanol part of the pilot phase of the project.

By the end of this year, the main wind turbine components – a nacelle, blades and tower sections – are to be transported from multiple ports in China and delivered in one lot as part charter to Punta Arenas, Chile. In addition, there will be various container and flat-rack transports from Europe. The longest components are the three blades just over 65m in the length and the heaviest part is the nacelle at nearly 77 tons.

The project is a collaboration between Siemens Energy (Germany), Porsche (Germany) and Highly Innovate Fuels or HIF (Chile). It will be the world’s first integrated commercial plant for producing climate-neutral fuel from wind and water with the purpose of decarbonising the transport sector.

The pilot development heralds an era of delivering projects where the resources for production of renewable energy are abundant. Commenting on the shift, Torsten Dubsky, project director for Haru Oni at Siemens Energy, states: “Renewable energy will no longer be produced only where it is needed, but where natural resources like wind and sun are available on a massive scale”.

He added that new supply chains are going to arise all over the world to carry renewable energy from one region to another, stressing that experienced market players like Kuehne+Nagel have a major role to play in guaranteeing the development of the infrastructure.