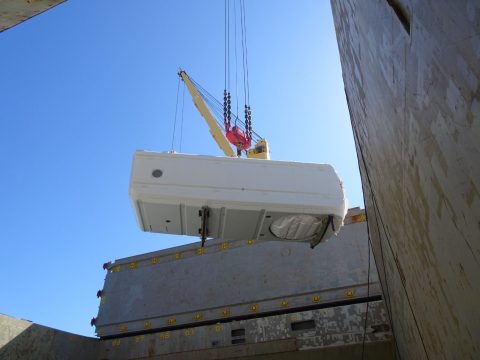 Renewables sectors, especially the onshore wind industry in the United States is picking up the pace and the German freight forwarder DAKO Worldwide Transport is in the midst of it. The company is involved in delivering project cargo to Texas for a number of wind farms under construction.

The company has recently concluded the loading of approximately 13.500 freight tons of wind mill equipment at Castellon Port, in Spain. This is the next shipment for a on-going wind energy project located in Texas, for which DAKO is handling the components from the port of origin up to DAP jobsite in Texas, in the United States.

This is the second batch of project cargo the German company is delivering for the El Sauz wind power project in Texas and the second project it has recently been involved in this U.S. state.

In March, DAKO concluded loading approximately 8,000 freight tons of windmill equipment at Chennai Port in India. The was transported for the El Sauz wind power project. The project will construct, own, and operate an approximately 300MW onshore wind farm in Willacy County, Texas. Construction kicked off in early 2022 with operation scheduled to start in the last quarter of the year. The wind farm will include 67 units each with a 4.5 MW output.

Earlier in February, DAKO wrapped up the delivery of wind blades for the Blackjack Creek onshore wind project in Texas, United States. The project, located in Bee and Refugio counties, Texas, is being developed by RWE and will be powered by 50 4.8 MW Nordex turbines with a total installed capacity of 240-megawatt (MW). During the past week DAKO Worldwide Transport delivered the last of 150 wind turbine blades for the project. Each blade has an overall length of 77.5 metres.