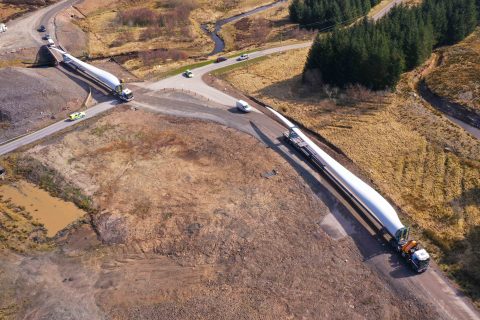 Located south of the A70, near the village of Glespin on the Douglas Estate, the thirteen turbine site features Nordex N133 onshore wind turbines with an individual blade length of 64 metres and a tip height of no more than 180 metres.

Collett were appointed to undertake all logistical planning and execution to deliver each of the 130 components, including the preparation of all method statements, risk assessments and all supporting documentation.

Beginning with a test drive of the 46-mile route from King George V Dock to South Lanarkshire, the Collett team simulated the 68-metre loaded vehicle to ensure that the 64 metre blades could safely traverse the route. Utilising the data gathered during the test drive, coupled with the preliminary planning reports, allowed the Collett team to determine the suitability of the route, identifying any necessary modifications ahead of the commencement of deliveries. This included the removal of street furniture at King George V Dock and required civils work on site to prevent the loaded trailers grounding on the wind farm access roads.

Having undertaken all these modifications ahead of the delivery schedule, phase one of Kennoxhead wind farm began. Utilising King George V Dock’s 32.6 hectares of storage, all components were imported to the Glasgow facility for onward transport.

Each of the loaded components left King George V Dock between 9:30am and11:30am travelling under police and private escort for the 46-mile journey to the South Lanarkshire site. Leaving Glasgow, each of the blades, towers, hubs and nacelles followed the M74 towards Abington before joining the B7078 and travelling via Andershaw Wind Farm before merging on to the Glentaggart Road to the Kennoxhead wind farm site entrance.

With the identified civils having already been completed, each component travelled to the respective pad site, employing Collett’s specialist onsite towing vehicles to overcome steep gradients and unpredictable access conditions due to adverse weather.

Phase one of the Kennoxhead Wind Farm is now completed with the 133.2 metre diameter turbines featuring a 13,935 sqm rotor sweep expected to enter commercial operation later this year.

Phase 2 of the project is still in development with 14 proposed additional turbines expected to enter commercial operation in 2024.