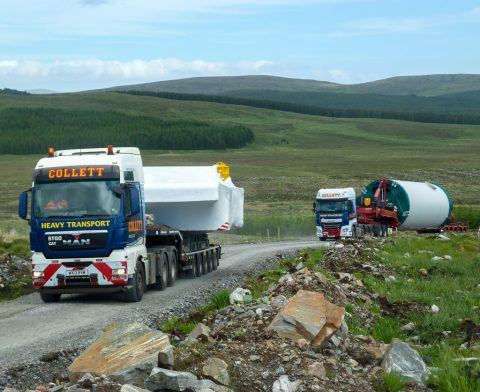 Since June, the abnormal loads transport specialist, Collett has been busy with the deliveries of 242 components to construct 22 Enercon E115 E3 wind turbines at Creag Riabhach wind farm. Currently under construction, Creag Riabhach Wind Farm is situated on the Altnaharra Estate, near Lairg in the North Highlands, and features 22 67-metre hub height turbines with 57-metre blades.

Arriving at the Port of Nigg, the largest open port in the Moray Firth, Inverness, the components faced a 53-mile journey to the construction site in the North Highlands. Having already undertaken a test drive of the route utilising a 48-metre trailer, complete with a 9-metre rear projection to simulate the loaded Enercon E115 turbine blades, Collett had fully surveyed the route to ensure suitability.

Alongside highlighting any necessary route modifications and road widening requirements, Collett’s test drive also identified areas of street furniture removal, relocation of flower beds and lamp post removals to accommodate the
wind turbine oversail. Having modified the route for the passage of the blades, the longest of the components, Collett could ensure safe passage of all 12 components necessary to construct each complete turbine.

With this in place, Collett began the project, transporting the 66 blades, 66 tower sections, 44 stator halves and 22
nacelles, hubs and rotor centres the 53 miles from Inverness to Lairg. Utilising a total of nine trailers across its fleet to accommodate the varying components, deliveries are now underway. With cargoes ranging from 31 to 73 tonnes, Collett are employing the capabilities of its super wing carriers, clamp trailers, stepframes and 40-ft flats to systematically deliver the components in line with the construction schedule.

Travelling in convoys of three, and utilising each of the trailer’s hydraulic capabilities to ensure a maximum traveling height of 4.95-metres throughout, Collett employed manual steering and contraflow manoeuvres along the route, safely delivering the first of the components to site.

On arrival at Creag Riabhach, due to site gradients, the dynamic nature of the weather and the subsequent site conditions, Collett employed the addition traction of a double-drive towing vehicle, travelling in front of the delivery convoys for the heaviest of the components.

Beginning in June, Collett have already completed the delivery of components for four complete 115-metre rotor diameter turbines, with all 22 expected to be complete by September/October. Once fully operational, Creag Riabhach Wind Farm will generate up to 72.6MW of clean, renewable energy, enough to power 36,000 homes.