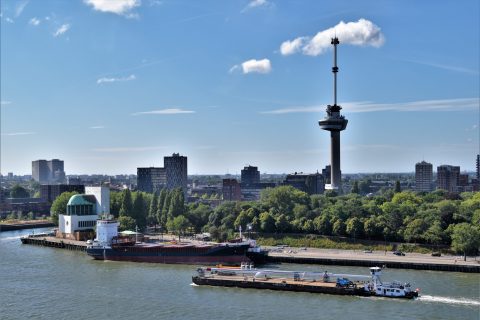 The first of three masts, belonging to the Amazon billionaire Jeff Bezos’s 127-metre superyacht, is on its way to Greenport Shipyard in the Rotterdam Eemhaven, where the hull of the Oceanco Y721 super yacht has been since the morning of August 2nd.

The 127-metre long hull was transported via the Oude Maas, by Royal Van der Wees. The masts are being transported by Hebo Maritiemservice. The first mast was transported lying on two pontoons, propelled by a pushboat, via the Nieuwe Maas.

Jeff Bezos’ new superyacht is a three-mast yacht. The three masts caused major problems earlier this year, because installed on the ship, the super yacht would be too high to pass the iconic De Hef bridge, a historic Rotterdam landmark. Oceanco and Bezos would have been willing to pay for the dismantling of De Hef, but the idea caused quite a stir among locals.

For a long time, it was unclear whether or not the ship would pass De Hef, officially named the Koningshaven bridge. Despite the fact that Rotterdam alderman Karremans had let it be known that Oceanco had not yet submitted an application for the project, the rumour alone caused threats at the address of Oceanco. On Facebook an action was set up to throw eggs on the superyacht, when it passed De Hef.

When completed, the 127 metre long superyacht will be the largest superyacht in the Netherlands. It will pass Infinity, the 117 metre superyacht that was also finished by Oceanco this year.