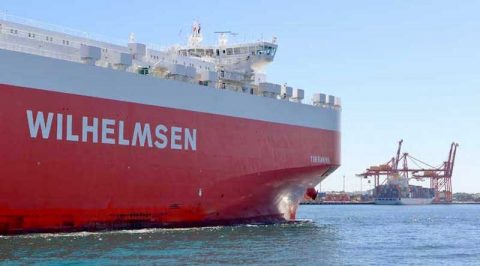 Norwegian shipping company Wilhelm Wilhelmsen has booked a loss of 74 million dollar in 2018, as the preliminary annual figures show. ‘The value of our investments took a beating in the fourth quarter’, says Group CEO Thomas Wilhelmsen.

Despite the growth in turnover the company was hit with a deficit, mainly due to depreciation of assets and affiliates. Net result showed a loss of 74 million dollar.

Wilhelm Wilhelmsen through its affiliates and joint ventures (Wallenius Wilhelmsen, Eukor and United European Car Carriers) operates a large fleet of car carriers for the transport of vehicles, breakbulk and project cargo.

The fourth quarter of last year was a tough one, says Wilhelm Wilhelmsen. ‘It ended at a net loss due to a substantial change in fair value evaluation of the group’s investments.’

‘The underlying performance was stable in a continued challenging market. With activity levels on par with the previous quarter in ship service and ship management, the seasonally lower activity level in the offshore sector was offset by delivering logistics services to the NATO exercise Trident Juncture.’

The EBITDA ended at USD 29 million, down 12% from the previous quarter. A positive development in the maritime service segment was not enough to make up for reduced EBITDA in the supply service segment.

‘The value of our investments took a beating in the quarter, leaving us with a net loss of USD 40 million’, says Wilhelmsen.

For 2019 the company says the market prospects call for a cautious outlook. ‘The beginning of 2019 has so far shown an uplift in valuation of listed entities and 2019 will be characterised by initiatives to strengthen profitability in all of our companies.’