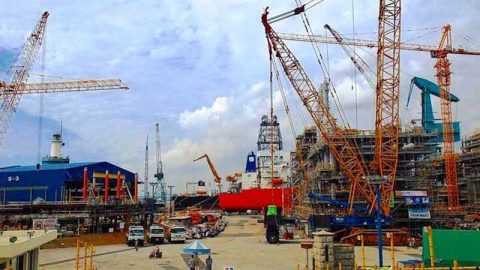 Shipbuilder Hyundai Heavy Industries has acquired its smaller rival Daewoo. Despite fierce opposition from employees, Hyundai and Daewoo’s major shareholder, the state-managed Korea Development Bank, signed a contract for the acquisition last week. If the take-over receives international approval, Hyundai will control one-fifth of the market.

The deal involves 2 trillion won, or one and a half billion euros, and comprises the sale of KDB’s 55.7% stake in Daewoo to Hyundai Heavy. At the same time, KDB will purchase 1.5 trillion won worth of shares in Hyundai Heavy, which will be issued at a later date, reports Korean news agency Yonhap. In fact, the acquisition is therefore paid in shares.

After the acquisition, Hyundai Heavy will be split into two entities, one of which will be traded on the stock exchange. Hyundai Heavy was the only potential buyer after Samsung Heavy, the other major Korean shipbuilder, declined an offer to bid.

According to KDB chairman Lee Dong-gull, the agreement is part of a larger plan to increase the competitiveness of the Korean shipbuilding sector. ‘The aim of the agreement is to ultimately also create stable employment positions and to stimulate the local economy.’

The employees of the shipbuilders are sceptical about those stable employment positions. In fact, they actually fear massive layoffs and have been taking to the streets for weeks already in an attempt to block the takeover. According to Yonhap, hundreds of employees even attempted to storm the KDB office on the day the agreement was signed.

In the past, Korea’s shipbuilding industry was the cornerstone of the national economy. As a result of fierce competition from China and the downturn in the shipping sector, the shipbuilders have however already been under significant pressure for years. Only last year, Hyundai Heavy for example saw itself forced to close its offshore yard following a complete halt in new investments due to the low oil price.

Seoul therefore recently approved a large-scale set of measures to support the sector. This includes the financing of a large order for twenty mega vessels (twelve of 23,000 TEU and eight of 14,000 TEU) by the country’s largest shipping line Hyundai Merchant Marine. These ships are built by Hyundai, Daewoo and Samsung.

The support that Seoul is thus providing to its shipping and shipbuilding sector has come under strong criticism from, amongst others, Japan and Europe.

Hyundai Heavy was already the largest shipbuilder in the world, but the acquisition of Daewoo has considerably strengthened that leading position. If the takeover proceeds, the company will control one-fifth of the market. Hyundai Heavy Industries Holding will then own 26% of the new company; KDB will have an 18% stake.
To proceed, the agreement must first receive international approval by competition authorities.