Rising project cargo traffic will strengthen freight rates for the multipurpose and heavylift shipping sector throughout 2019, but prospects thereafter are muted by an anticipated slowdown in world trade, says Drewry Maritime Research.

Although the uncertainty surrounding trade demand is receding slightly as the US and China appear to be moving toward some kind of a truce, the global economic outlook has deteriorated and continued uncertainty in Europe due to Brexit suggests that multipurpose shipping is not out of the woods yet, the analyst firm says.

As a result, Drewry expects the addressable demand for the multipurpose vessel (MPV) fleet to grow with only 1.2% annually on average to 2023. “This is, however, much stronger in the short term, at 3.8% in 2019 and 1.4% in 2020. This is because as the global economy is expected to slow down after 2020, increased competition for cargo will eat into market share,” senior analyst for the multipurpose and heavylift market Susan Oatway notes.

The project cargo market is expected to be strong in 2019 as it was boosted by the rise in oil prices through the first half of 2018. The price of Brent oil decreased significantly at the end of 2018 again, but in the first quarter of 2019, it rose back to 71 US dollar per barrel just last week. Over the longer term, however, Drewry expects the oil prices to average under $70 per barrel and this will limit new project investments. 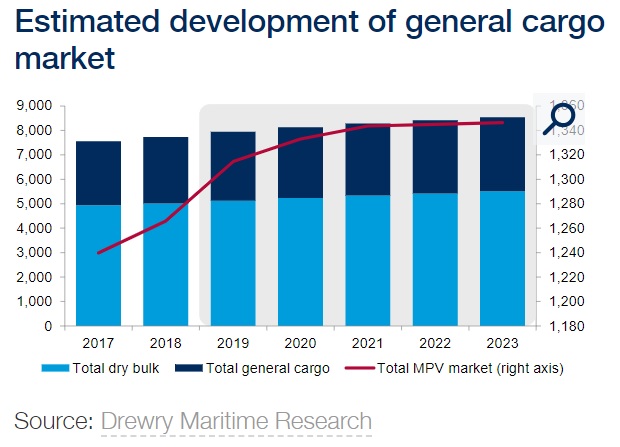 On the supply side, the fleet is continuing its trend towards vessel with greater lift capacity. The number of multipurpose vessels with lift capacity of less than 100t SWL is contracting at a rate of 3% per annum to 2023. Although demolition levels are currently at an all-time low, they are expected to pick up over the year and the multipurpose (no gear & geared) sector has the most overaged tonnage available for recycling. The increase in demolitions will likely be helped by the new sulphur regulations of the International Maritime Organization (IMO), that will come into force per 2020.

Meanwhile, the project carrier fleet with lift over 100t SWL is growing at a rate of around 2% per year as most of the newbuildings being delivered and on order are in this category. The combination of the two sectors leads to a net contraction of about 0.2% pa to 2023 in total MPV supply, Drewry forecasts.

The container and dry bulk shipping sector have always been fierce competitors of the multipurpose fleet, but the intensity of their competition depends heavily on the demand development of their traditional cargoes. In example, in 2016, when the container shipping demand was at a low point, the competition of the container carriers was incredibly fierce, while last year the competition had softened significantly as a result of stronger container transport demand.

How fierce the competition will be in the next couple of years, depends very much on how the trade war between the US and China plays out, but Drewry does expect it to pick up again.

“In the short term, the MPV share is expected to improve as the competition moves back to its more traditional cargo base. However, as general cargo demand weakens over the longer term with slowing economic and trade growth, it is anticipated that these competing sectors with their own oversupply challenges will return to breakbulk and project cargo and so stagnate MPV’s market share,” the analyst firm says. 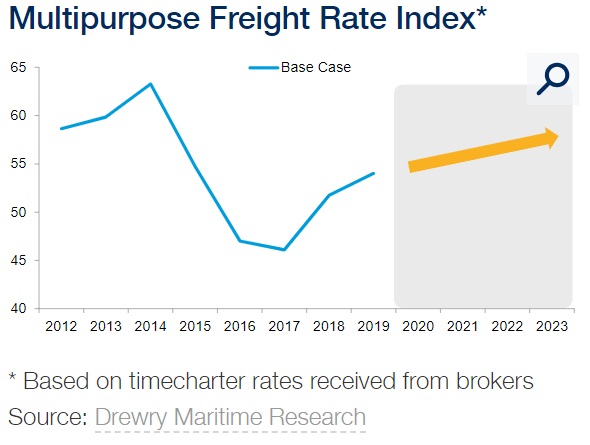