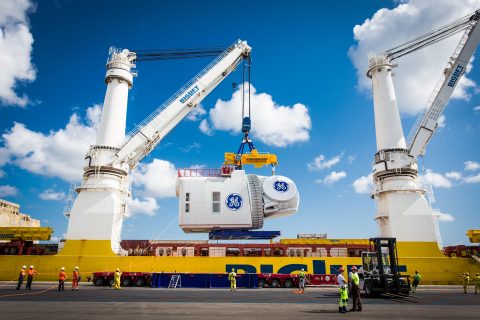 Shipped by the Heavy Lift Group, the worlds largest wind turbine has arrived in Rotterdam where it will be installed onshore for testing. The 12-megawatt strong wind turbine reflects the next step in offshore wind power generation, but also pose challenges for the logistics industry.

The mega wind turbine manufactured by General Electrics weighs a staggering 713 tons and could only be shipped by sea. To do so the Heavy Lift Group contracted Big Lift, which deployed one of its largest vessels for the job: the MV Happy Sky (18,680 dwt) equipped with two 900 mt strong cranes.

General Electrics revealed the prototype of its new generation of offshore wind turbines, called Haliade-X 12 MW, less than a month ago at its production facility in the French town of Saint-Nazaire. Although the prototype is meant for offshore applications, it will be installed onshore at the Maasvlakte in Rotterdam “to simplify access for testing”, the company states.

The onshore installation is part of an initial release strategy designed to allow GE to obtain the data required to receive its type certification, which shows the manufacturer is really pushing the envelope of offshore wind turbines. In comparison: the largest offshore wind turbines that are being installed now generate 9.5 megawatts. The new wind turbine also generates twice as much power as the ones GE has been manufacturing in Saint-Nazaire for the past few years.

According to GE, the turbine can generate 67 GWh in gross annual energy, providing enough clean energy to power 16,000 European households and save up to 42 million tons of CO2, which is the equivalent of the emissions generated by 9,000 vehicles in one year alone.

“Today’s presentation of the first-ever Haliade-X 12 MW nacelle at Saint-Nazaire is the start of a key new phase in our ongoing commitment to structuring the offshore wind turbine segment,” said CEO Jérôme Pécresse of GERenewable Energy when the prototype was revealed on 22 July. “This project clearly reflects our ability to invest and innovate, supporting our customers in an ultra-competitive market in exponential growth. Thanks to the Haliade-X 12 MW, we are proud to prepare for the future of the offshore wind industry.”

John Lavelle, CEO of GE Renewable Energy Offshore Wind, added: “We are on track to start commercializing this new product very shortly. Once we have received the type certificate (2020), we will be ready to start mass production and send out the first commercial units by mid-2021.”

The increased power output of the prototype is meant to increase the efficiency of future offshore wind farms, but the scale increases in the industry also pose a challenge for the transport industry. The blades of the Haliade-X measure 107 metres in length, which has consequences for road transports which are limited by weight and length restrictions.

Offshore contractors are being forced to invest in new equipment to secure offshore wind farm contracts going forward. Belgian offshore contractor Jan de Nul Group earlier this year announced the ordering of a new installation vessel which will have a payload of 14,000 tonnes and will have twice the amount of deck space as the group’s two other jack-up vessels, the Vole au vent and the Taillevent. The Voltaire, as the new fleet addition will be called, will boost a Huisman equipment crane capable of lifting 3,000 tonnes.

Terminal operators are also looking for ways to handle the ever-larger wind turbine components. Spanish terminal operator Tadarsa recently contracted Kalmar to design, develop and build new equipment to help it move gigantic turbine foundations on its terminal in Avilés, Spain. Kalmar’s solution is a bigger variant of reachstacker which can is equipped with a hook to pick up one end of a foundation. That means two are needed for the job.

The scale increases in the offshore wind industry will be one of the key topics of the Project Cargo Summit, a two-day international conference about the transport of large and heavy cargoes, which is organised by Promedia Group on the 11th & 12th of September, 2019 in Rotterdam. Among the speakers will be Siemens Gamesa, Wallenius Wilhelmsen, Kalmar and Van der Vlist Transport. For more information about this dedicated project cargo and heavy-lift event, please visit www.projectcargosummit.com.

Rystad: Shortage of installation vessels as early as 2025