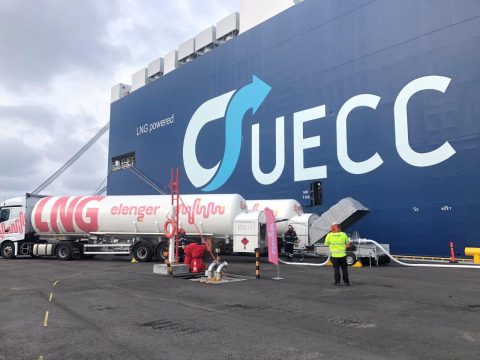 Finnish energy supplier Elenger has started delivering LNG in the port of Hanko. First customers are the largest shortsea dual fuel car carriers in the world, the Auto Energy and Auto Eco of UECC.

Sister ships Auto Energy and Auto Eco transport new vehicles from Europe to Finland and Russia. They are ice-class 1A Super vessels and can accommodate a total of 4000 vehicles on their ten decks.

The first LNG-bunkering in the port of Hanko followed a lengthy period of thorough preparation and work for the prevention of any potential risks, Elenger states.

In the following months, truck-to-ship bunkering in Hanko will be performed once a week, every Friday. Four truckloads of LNG, which makes 72 tonnes, will be pumped to the ship. Elenger is planning to deliver the LNG from the new Novatek LNG plant in Vysotsk, which was commissioned with the assistance of Elenger experts.

Elenger says it is the leading LNG supplier in the region and the biggest truck-to-ship LNG bunkering provider in whole Northern Europe. In the ports of Tallin and Helsinki, it has delivered LNG by truck to the Tallink-operated ferry Megastar over 2,000 times. Elenger and Tallink are both subsidiaries of the same investment company, called Infortar.

In 2018, Elenger supplied over 16,000 tonnes of LNG from its various sources in Russia, Finland, Lithuania and Poland. That reflects an increase of almost 33% in comparison with the year before when it supplied 12,300 tonnes of LNG.

“In addition to new passenger ships, new cargo vessels are changing to the LNG technology in larger and larger numbers. LNG will eventually replace diesel fuel among marine fuels, which will contribute to cleaner air and cleaner Baltic Sea,” says Kalev Reiljan, member of the board at Elenger.

Currently, the Dutch shipbuilding company Damen is building a LNG bunkering vessel for Elener, which is to render services in the northern and eastern part of the Baltic Sea. “It will be completed in 2020 and start bunkering environmentally friendly vessels operating in the Gulf of Finland,” the company states.