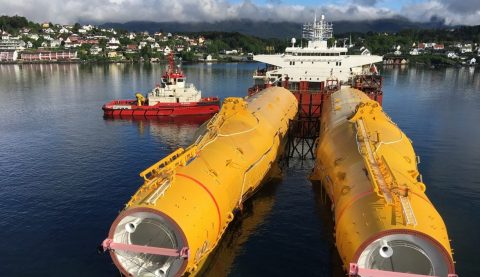 OHT to transport 48 jackets for DEME

Offshore Heavy Transport (OHT) has been contracted by DEME to transport 48 jacket foundations for the Moray East offshore wind project in Scotland.

The jackets need to be transported from the Lamprell fabrication yard in the United Arab Emirates to the Port of Nigg in the Scottish Highlands. OHT will deploy three of their largest semi-submersible heavy transport vessels to the project.

The three-legged jackets weigh more than 1,000 tonnes each on average and reach up to
80 metres in height. OHT’s vessels will carry eight foundations per voyage, meaning each vessels will have to do 2 trips. The company has said the vessels will sail around Cape the Good Hope, which is 12,000 nautical mile journey.

“We started discussions in early 2015, developing the transportation concept, and we have since
been in close and open dialogue with DEME Offshore,” said Eirik Rieber-Mohn, tender manager at
OHT.

“This contract comes at the perfect time, as we approach the highly anticipated launch of our first vessel built specifically for the offshore wind market,” adds CEO Torgeir Ramstad. “This ship will be the world’s largest, most innovative and efficient custom-built offshore wind foundation installation vessel.”

OHT’s new Alfa Lift design vessel Ramstad is talking about will feature a 3,000-ton main crane and a “smart deck” of more than 10,000 square meters. It will be capable of carrying and installing up to 16 extra large monopiles or 10 jackets per voyage and will be able to fully submerge the main deck to a depth of 15 metres.

Transportation of all jackets is expected to be completed by September 2020. The companies did not disclose the value of the contract.