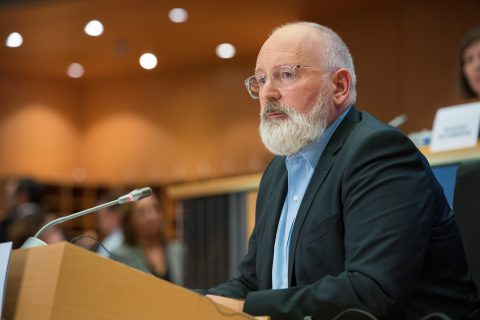 The future European climate commissioner Frans Timmermans wants to put CO2 quotas on shipping. A plan that has been met with fierce criticism from shipowners. Instead of including shipping in the European Emmission Trading Scheme, the shipowners plead for the introduction of a bunker levy.

In a hearing on October 8th about his climate plan, Timmermans said transport is one of the most polluting sectors of our economy and that the EU needs to tackle this head-on. “We need to cut emissions in the aviation and maritime sectors in particular. If we are to meet our climate goals”, he said in his introductory speech.

He announced that within 100 days a new climate law will be proposed to enshrine the 2050 carbon neutrality objective, deliver on higher ambition for 2030 and update existing climate legislation. He also said emission cuts are needed in the aviation and maritime sectors and that the scope of the European Emission Trading System (ETS) should be broadened.

The Dutch shipowner’s association KVNR was quick to issue a response to Timmermans’ statements, saying the EU-ETS is not suitable for the shipping industry. “This system allows a shipping company a maximum of CO2 emission rights. Shipowners can buy or sell these rights from or to other shipping companies but the extra administrative burden that comes with those transactions is huge and we need prevent that”, said policy adviser Nick Lurkin of KVNR. He added that the system is too complicated and that there’s a better alternative.

“The Dutch shipowners propose to introduce a levy on ship bunker fuels. The proceeds of that should be put into an international fund to finance innovation in alternative energy sources for ships and maritime infrastructure”, Lurkin said.

Managing director Annet Koster of the Dutch shipowners’ association added that shipping companies are already deploying many initiatives to improve the fleet’s sustainability. “This shows shipping companies are willing to take responsibility. We would, therefore, be happy to think and work along with you to develop a broad-based European action plan”, she said.