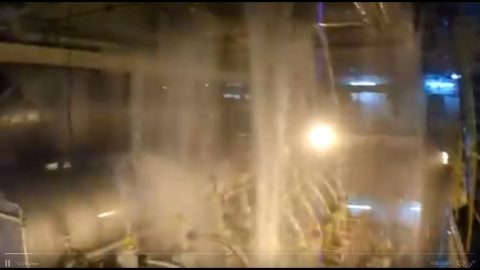 Norwegian P&I club Gard reports of several cases in which scrubbers have caught fire or corroded within a year. The insurance company is warning shipping companies and their crew members to keep a close on the machinery.

The new sulphur regulation is fast approaching and it is estimated that nearly 3,000 vessels will have scrubbers installed by the beginning of next year. For the majority of owners and their crew members, scrubber systems are new technology and teething problems can be expected, Gard warns.

“Scrubber waste is corrosive, and we have seen a few incidents where within 10 to 15 months of the open-loop scrubber being installed, corrosion of the overboard distance piece or in its immediate vicinity has resulted in water ingress into areas such as the engine room, ballast tanks and cargo holds”, the insurance firm reports.

Gard emphasizes the importance of having properly applied protective coatings as poor application of paint on the inside of the pipe, welds and hull plating near the wash water discharge were identified as the causes of accelerated corrosion. In all these cases, the ships had to return to the yard for reparations, which can be a costly exercise.

Gard also warns of problems as a result of thermal shock. A vessel equipped with an open-loop scrubber sustained damage to the nozzles, demister housing and the drains after cold seawater was pumped into a hot scrubber. The vessel had to change over to low sulphur fuel when visiting a Northern European port that has banned the discharge of washwater from open-loop scrubbers. The scrubber, however, was still required to run in dry mode to allow for the passage of hot exhaust gasses with a temperature of nearly 400° C. When the washwater pumps were started again following the departure of the port, the rapid temperature change damaged the system.

There have also been several fire incidents during the installation of scrubbers, where sparks from welding, metal cutting, and other hot work activities fell into the inner chamber of the scrubber through uncovered openings, and in one case the fire also spread to the engine room through glass reinforced epoxy piping. Heat generated from the steel cutting for the supporting brackets also contributed to the build-up of heat inside the scrubber. “In all these cases the yard fire fighting team responded and extinguished the fire with vital assistance from the crew”, Gard reports.

It is not the first bad press for scrubber systems. Last month, a video of a scrubber failure went viral on social media. In the video, huge amounts of water were leaking down into the engine room. Although unconfirmed, many experts expected corrosion of the scrubber system to be the problem.