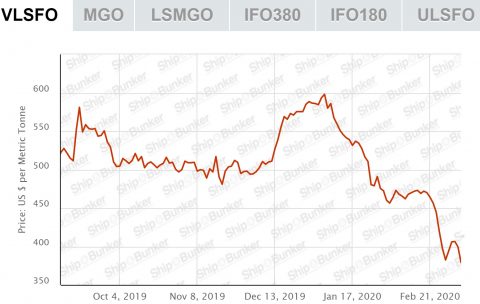 Fuel prices have taken a massive nosedive since the beginning of the year with low sulphur fuel prices in Singapore dropping from USD 734 per tonne on January 1st to USD 415 per tonne today.

The price drop comes at a good time as the transport and logistics industry is struggling with low demand as a result of the coronavirus. Export in China fell by 17% in January and February, reports the Chinese customs authority.

The fuel prices follow that trend and are dropping in even bigger percentages. In Rotterdam, a tonne of low sulphur fuel oil sold for USD 379 on Sunday, reflecting a decline of 35% in comparison with January 1st when a tonne of VLSFO in Europe’s largest port cost USD 586.

Prices could drop even further after OPEC+ imploded over the weekend as Russia rejected any further production cuts. In response to the coronavirus, which has significantly lowered oil demand in China, Saudi Arabia wanted OPEC and its partners in OPEC+ to introduce further production cuts. Russia, however, rejected the proposal, saying the US has benefitted and gained market share every time OPEC+ curbed production. Instead of lowering production, Russia is actually planning to ramp up its oil output to call the US producers to a halt.

The decision was ill-received by Saudi Arabia which warned Russia it would regret this decision and immediately launched a price war by ramping up production and lowering its oil price. As Saudi Arabia is the lowest-cost oil producer in the world, it is best equipped to sustain such a low price oil market. As a result of the move, the price of Brent oil instantly dropped from roughly USD 45 to USD 35 per barrel.