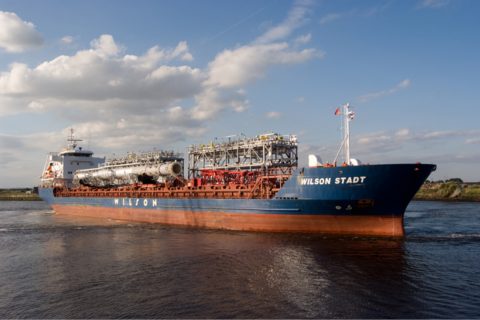 Wilson CFO: “There should be fewer, bigger players”

The European shortsea sector has been struggling for over a decade. “Consolidation is much needed, says Wilson Shipping’s CFO Stig Vangen. “There should be fewer, bigger players because the options are running out. And it is in times like these, this can happen.”

The Norwegian shortsea carrier has taken the lead by taking over Arkon Shipping’s dry bulk business. The companies recently signed a deal which sees Wilson take over Arkon’s dry bulk fleet and associated customer contracts, while Arkon will become the exclusive commercial agent for the entire Wilson fleet in the Mediterranean.

In total, Wilson will take over 20 vessels from Arkon, including 16 dry bulk vessels, and four eco-friendly multipurpose newbuildings which are currently under construction.

The cooperation is not set up as a joint venture, but rather consists of long term lease agreements and an exclusive agency agreement for the Mediterranean for Arkon. “Arkon has a strong presence there, so it makes sense that they will complement us in the Med”, says Vangen.

The agreement was not the result of the Covid-19 pandemic, but rather the tough decade the shortsea sector has endured and which saw many companies bite the dust. “It has been 10 difficult years in the shortsea market and consolidation is much needed. We’ve had several friendly conversations with Arkon in the past few years and this cooperation is the result of that. The agreement was actually in place before the pandemic”, Vangen adds.

The agreement will help Wilson to modernize its fleet. The shortsea sector is characterized by old dry bulk vessels and Wilson’s fleet is no exception. Many of the company’s vessels are over 20 years old.

While Arkon has older vessels in its fleet as well, about half of the company’s vessels are younger, with construction years ranging from 2007 to 2010. More interestingly, the company last year ordered four modern and eco-friendly 4,200 dwt multipurpose vessels. These 90-metre long vessels feature diesel-electric propulsion systems with after treatment and are designed to increase fuel efficiency through an improved hull design. They’re also equipped with an enlarged open-top cargo hold which makes them suitable for larger project cargoes.

Wilson has already taken over some of the vessels and more will follow this summer. The shortsea carrier will deploy them in the spot market. “The vessels are a good age match-up. We will now try to utilize and optimize them”, says Vangen.

It is likely that Wilson will be scrapping some of the older vessels now that the company is adding younger, more fuel-efficient tonnage to its fleet. However, Vangen adds that scrapping is challenging in the current market situation. “In general, though, players don’t invest much in older vessels, so with the new environmental legislation it is likely that we will see more scrapping soon.”

The shortsea sector has been struggling ever since the financial crisis began in 2008. For Wilson, the continuous oversupply in the years that followed led to net losses in 2011, 2012, 2015 and 2016.

Since the end of 2017, however, the shortsea market was gaining positive momentum again, resulting in significantly better results for Wilson. In 2018 and 2019, the company closed the year with sales around the EUR 275 million mark and net profits of EUR 12.7 and EUR 11.2 million, respectively. In comparison: in 2017 net profit amounted to EUR 3.8 million, following a loss of EUR 2.4 million in 2016.

Despite the new crisis hitting the sector, Vangen remains optimistic about the future. “Covid-19 has led to reduced demand and increased uncertainty in regards to clients and finance and this will continue over the summer. However, we still believe there will be demand for smaller vessels so when the European industries get back on track, our company is well-positioned going forward”, the CFO says.

Of course, ‘when’ remains the big question. “At this moment the market can only be described in one word: uncertain”, says Vangen. “We have seen an increased level of activity in Europe, but we’ll have to see how this develops after the summer. With government stimulus, maybe we could see a recovery in the second half of the year, but it could also be 2021 or 2022.”

Asked if the shortsea sector can wait for that long, Vangen says that companies with a high contract coverage of 50% and higher, as Wilson has, will be okay. “For others, it could be very difficult.”