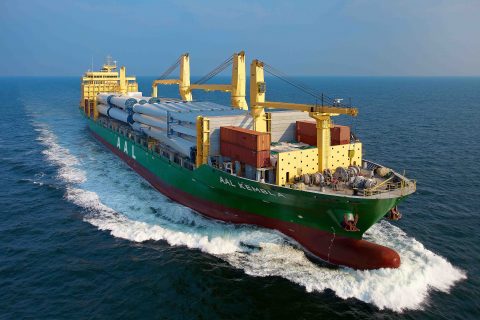 One year after the launch of its Europe/Middle East – India/Asia monthly liner service, AAL Shipping has decided to commit six of its “mega-size” heavy-lift vessels to the service for the long term. The decision is based on the growing popularity for the service amongst both large and small shippers, AAL says.

Shipper demand has been amplified by the reliability of the scheduled monthly frequency, which has been a great success despite its launch coinciding with one of the most challenging periods for the global shipping community, the project carrier states.

“It would have been justified if we had simply postponed our plans at the time and waited-out the worst of the pandemic and its potential impact on cargo readiness, port delays and crew restrictions. However, we had already built momentum in the shipper market and established strong relations with important partners and base ports along the service like Antwerp, Porto Marghera, Dammam and Jebel Ali”, comments Eike Muentz, general manager at AAL Europe. “Despite severe pressure on our operations due to international Covid-19 restrictions, we have performed every sailing as planned and scheduled from then until now.”

According to commercial manager Kay Goldenstein, customers were initially cautious, having witnessed other multipurpose carriers on the trade lane fail to deliver on commitments. “The fact that AAL had run a successful liner service between Asia and Australia for 25 years and had direct recent experience of operating numerous sailings between Europe and Asia gave us the confidence and credibility to approach shippers across Europe and the Middle East”, he says. “We established a presence in key hubs across Northern, Central and Southern Europe and got the word out quickly to interested partners with cargo needs. This developed into picking up breakbulk, steel and general cargo Eastbound and parcelled these up with any project cargoes headed in the same direction.”

AAL made the decision early to deploy its young 31,000 dwt A-Class fleet on the service. These vessels have 3,000sqm of clear deck space, 40,000cmb of cargo intake volume with adjustable tween decks and a lift capacity of up to 700 tonnes, making them both large and versatile.

“Running a liner service takes a significant commitment of resources and people working literally around-the-clock and right across the route to ensure that our six vessels are fully employed”, concludes Muentz. “We want AAL to be the first port of call for our customers and that requires trust and dependability and we are confident that the service and our team is up to the challenge.”