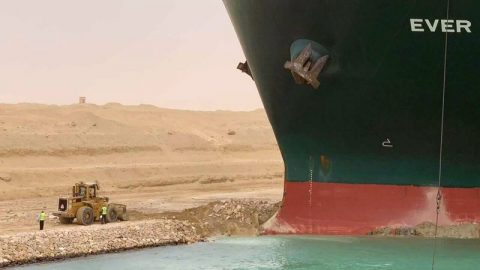 Boskalis CEO: “Refloating of Ever Given can take days to weeks”

While ten tugboats are still trying to free the container ship Ever Given, which grounded in the Suez Canal on Tuesday morning, Boskalis has sent a team to assist in the operation. The operation could take days to weeks, said Boskalis CEO Peter Berdowski on Dutch television. The shipowner may well face millions in claims.

The 400-metre long Ever Given is blocking he shortest shipping route between Asia and Europe. It covers the entire width of the waterway with a huge traffic jam of other vessels as a result.

The 193-kilometre Suez Canal is one of the busiest shipping lanes in the world, accounting for about 12% of global trade. Around one million barrels of oil and a large quantity of liquefied natural gas (LNG) are also transported through the canal every day.

When the Suez Canal is closed, ships between Asia and Europe have to detour via the Cape of Good Hope which can extend their voyage by weeks and drive up fuel costs significantly.

The Dutch company Smit Salvage, a subsidiary of Boskalis, has been called in to help salvage the ship. A team of ten people has been sent to Egypt to help with the operation.

In such cases, ‘you really have to do calculations to understand how firmly the ship is on the ground, and how much force you can apply without damaging it,’ said a spokesman.

In the Dutch television show Nieuwsuur, Berdowski called the attempts undertaken on-site so far “a brave attempt.” However, he explained that it will be a difficult operation. “You are dealing with a shipping lane that is up to 25 metres deep in the middle but soon after that, it goes to 15 metres, 11 metres and even less towards the ends. The ship has a draught of 15.7 metres. Especially at the front, the ship lies a metre on the slope”, Berdowksi said.

Due to the ship’s enormous weight, just pulling it free is not really an option according to Berdowski. He thinks the vessel should lose as much weight as possible by discharging water and oil and maybe even offload containers. As a further option dredging can be carried out.

Berdowski: YYou can then undermine the sandbank on which the ship is resting as it were. The combination of removing some of the weight, ensuring there is enough pulling force in the form of tugboats and dredging could remove enough of the friction to pull the ship free.”

He concludes that “the more firmly the ship is stuck, the longer the operation will take. It can take days to weeks. Also think about bringing in all the equipment we need, which is not just around the corner.”

Last night, the Suez Canal Authority (SCA) stated work to free the ship would continue well into the night, weather permitting. Earlier it was incorrectly reported that the ship had refloated.

According to Bernhard Schulte Shipmanagement (BSM), the ship’s technical manager, the ship’s crew is safe and there are no reports of pollution. The vessel is owned by Japan’s Shoei Kisen Kaisha. The owner could not be reached for comment at this time.

Taiwan’s Evergreen Marine, which leases the vessel, said the owner had said the vessel was “probably hit by a sudden strong wind, causing the hull to veer off course and accidentally hit the bottom.”

In Nieuwsuur, port researcher of the Erasmus University in Rotterdam, Bart Kuipers, says the container supply chain is vulnerable. 40% of the container ships that call at Rotterdam travel through the Suez Canal. This means the “supply chain is now blocked”. And where do you leave all the delayed ships once they do reach the port? “This will result in congestion in the port and handling problems”, he adds.

He also says the situation with the Ever Given marks a much wider problem. “The ships have become too big and too fully loaded. Now, a ship has grounded, others have lost containers at sea. These accidents all result from the same problem. These ships simply operate at the limit or perhaps have already crossed it”, Kuipers says.

The owner and insurers of the stranded ship can expect claims running into many millions of dollars, even if the ship is refloated quickly, sources in the sector have told Reuters.