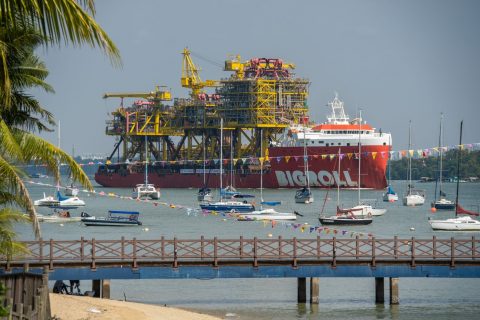 French oil and gas major TotalEnergies informed that the Tyra East wellhead and riser topsides departed Singapore. In a brief post through its social media channels, Morten Hesselager Pedersen, vice president, head of the Tyra Redevelopment at Total, noted that the units set off from Singapore on Sunday, July 25, at 9:23 local time.

Transported by BigRoll Beaufort, a vessel as long as three Olympic swimming pools, the units are expected to arrive at the Tyra field in the Danish North Sea in approximately one month. AIS data shows that the vessel is currently sailing in the Malacca Strait, Malaysia.

To remind, BigRoll Beaufort arrived in Singapore some three weeks ago. The load out of the three Tyra East well head and riser platforms was completed on July 9. Pedersen noted that the load out and sail-away preparations were completed in close cooperation with Sembcorp Marine which enabled timely sail-away despite constant COVID-19 challenges.

In its statement, Sembcorp Marine noted that it fabricated two wellhead topsides, one riser topside and two bridges for deployment to TotalEnergies’ redeveloped Tyra field.

Pedersen said, “the Tyra redevelopment project reaches a key milestone as the topsides are installed later this summer, and we will see the physical contours of Tyra II, which will be the new high tech hub for Danish natural gas and reduce CO2 emissions by 30 percent.”

Sarens wraps up 24 modules transport in the USA