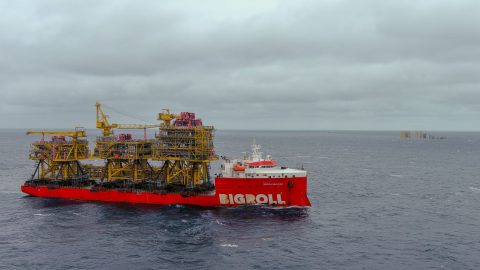 Installation of the new topsides for the Tyra Redevelopment project in the Danish North Sea is set to begin as the modules have reached the field. Following a 16,000-kilometre journey from Singapore, both BigRoll Beaufort and BigLift Happy Sky have reached their destination.

In a brief post through his social media channels, Morten Hesselager Pedersen, vice president, head of the Tyra Redevelopment at Total said that cutting sea fastening to release the topsides is currently in progress.

The heavy lift and installation job has been entrusted to Heerema’s semi-submersible crane vessel, Sleipnir. According to the contract manager T&I Tyra Redevelopment project at Total, Ronn Hansen, the vessel has been in action since last week, preparing the old jackets for the new topsides.

To remind, BigRoll Beaufort, a vessel as long as three Olympic swimming pools, loaded three new Tyra East well head and riser topsides at Sembcorp Marine’s yard in Singapore in mid-July, before departing near the end of last month.

BigLift’s Happy Sky followed at the start of August with the 1045 mt TEBZ bridge.