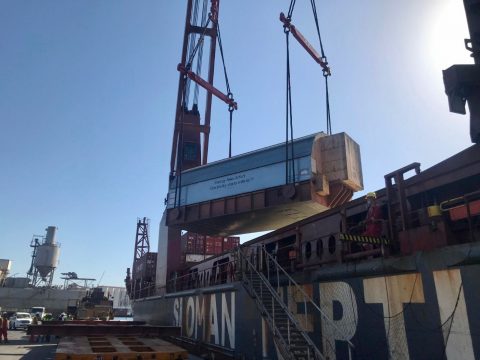 The Tripoli West power project in Libya has seen the second load of project cargo reach Tripoli.DAKO Worldwide Transport handled the delivery of more turbines and generators for the 671 MW project.

In a brief statement through its social media channels, DAKO Worldwide Transport, noted that the second load included the second batch of turbines and generators ranging between 183 and 221 tons unit weight, totalling 2,300 tons.

The loading in Hamburg took place earlier this month and it was completed in cooperation with DAKO’s client, Wallmann & Co. and the shipping company Sloman Neptun Schiffahrts. The project cargo was delivered onboard Sloman Neptun’s MPP, the Sloman Dispatcher with a 300-ton lift capacity. DAKO will also handle project cargo deliveries from China and Indonesia for the Tripoli West development.