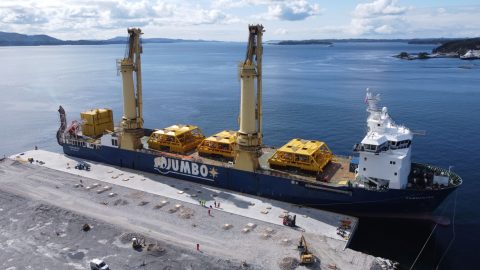 Jumbo-SAL-Alliance recently completed the delivery of three multi flow base templates (MFB) each weighing 239 tonnes from Tonsberg to Stord. The delivery was completed for Kuehne+Nagel and end client Havfram.

Having arrived in Tonsberg in August, the team loaded the MFBs onboard the Fairmaster, one of the two vessels from the K-class family, fitted with two 1,500-ton crane with a combined lift capacity of 3,000 tons. With the subsea cargo secured on deck, the ship and crew promptly transited around the Norwegian coast to Stord for on-time discharging operations, Jumbo-SAL-Alliance noted in its brief statement on social media.

The MFBs were then mobilised onboard CSV Viking Neptun for installation offshore. Havfram, formerly known as Ocean Installer, is carrying installation works for Vår Energi’s Balder project. Havfram, in partnership with Baker Hughes, a GE company, secured a contract in 2019 for the engineering, procurement, construction and installation (EPCI) of subsea systems and associated services for the Balder X project on the Norwegian Continental Shelf (NCS).

The Jumbo-SAL-Alliance added that since the delivery its vessel has completed an exciting transatlantic voyage to Newfoundland.