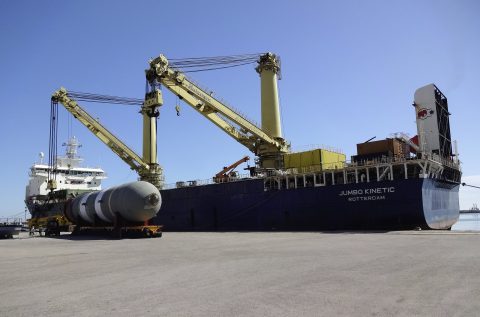 deugro moves one of heaviest heavy loads Germany has ever seen

Three reactors weighing a total of 1,603 metric tons were recently transported to the Port of Kelheim, making it one of the heaviest heavy load transports ever done in Germany. The complex logistics services specialist deugro said on Thursday it delivered the reactors, the heaviest weighing 663 metric tons, for Bayernoil Raffineriegesellschaft in Neustadt.

In the first phase of this project in July 2020, the first (temporary) reactor with a size of 25.71 x 5.20 x 4.26 metres and a weight of 343 metric tons, was shipped from Koper, Slovenia to Kelheim, Germany. deugro Netherlands arranged for the loading of the reactor, the journey from the Port of Koper, Slovenia to the Port of Rotterdam, in the Netherlands, and the onward voyage on a barge from Rotterdam to the Port of Kelheim, Germany, both on a 24/7 sailing basis, deugro said in its statement. on Thursday.

In the second project phase in May 2021, the two further reactors were transported to Kelheim, including a 663 metric-ton hydrocracking reactor measuring 32.76 x 6.57 x 6.61 metres and a 597.6-metric-ton hydrotreating reactor with dimensions of 29.73 x 6.38 x 6.33 metres. The hydrocracking reactor was loaded in Ortona, Italy and the hydrotreating reactor was loaded in Porto Marghera, Italy. The complete shipment took a sea voyage route from Porto Maghera to Rotterdam in the Netherlands.

Upon arrival in Rotterdam, both reactors were directly discharged onto a coupling barge for the onward barge shipment to Kelheim, Germany. Due to the time-critical nature of the shipment, a 24/7 sailing program was required, necessitating three skippers to be present on the barge all the time to ensure safe round-the-clock navigation of the cargo.

“With a total volume of 3,192.368 cubic meters and a total weight of 1,603 metric tons, enormous time pressure for both phases, and one of the reactors being the heaviest heavy loads ever transported in Germany, this project was very complex and challenging, especially due to COVID-19 restrictions,” said Marco Lauwrier, manager projects, deugro Netherlands.