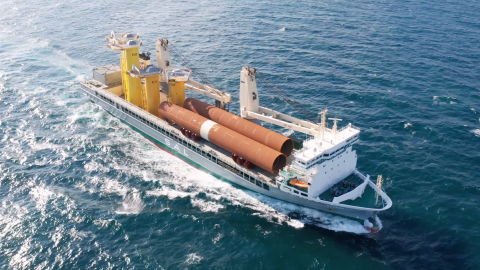 In early October, SAL Heavy Lift’s MV Svenja completed the last of its 20 journeys for the Saint-Nazaire offshore wind farm project in France. Right after the completion of the Hornsea 2 project earlier this year MV Svenja was immediately mobilised for her next project at the port of Eemshaven: The Saint-Nazaire offshore wind farm foundation transport.

For the Hornsea 2 project, the 2010-built vessel completed seven trips transporting a total of 21 monopiles measuring up to 74 metres with a diameter of 9.5 metres. The Saint-Nazaire scope included the transport of 80 monopiles and 80 transition pieces spread over a total of 20 trips. First of the journey’s was completed in February with the final delivery completed earlier this month.

The 480 MW Saint-Nazaire offshore wind project is being developed by EDF Renouvelables and EIH S.à r.l, an indirect subsidiary of Enbridge, and CPP Investments. Saint-Nazaire, scheduled to be operational in 2022, is the first commercial offshore wind farm installed in French waters, situated on the bench of Guérande, approximately 12 km from the coastline. The offshore wind farm will feature 80 Siemens 7 MW turbines, installed at depths between 12 and 25 metres. Monopiles and transition pieces have been manufactured by Sif Group.