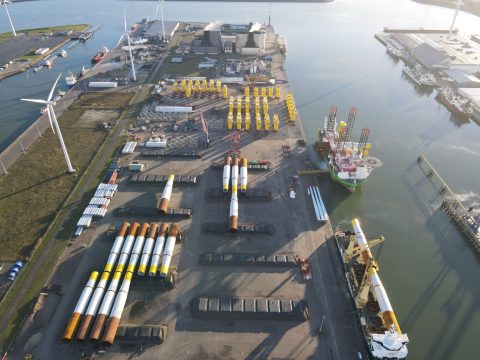 The Buss Terminal in Eemshaven was contracted by DEME Group Offshore, responsible for the transport and installation of the monopiles and transition pieces. Buss Energy Group provided a full scope of base harbour activities, including the handling of components of up to 1,230 tonnes per unit, provision of onshore storage solutions for monopiles and transition pieces and provision of warehousing and office facilities. Furthermore, a custom designed transition piece gantry handler was used to enable a more efficient logistics and storage set up.

The wind farm Hornsea Two is located 89 km off the Yorkshire coast in the North Sea, spanning an offshore area of 462 km². It operates 165 Siemens Gamesa 8MW wind turbines, powering well over 1.3 million households with renewable energy from 2022 onwards.

Jumbo Maritime team, part of the Jumbo-SAL-Alliance, also took part in project cargo deliveries for the Hornsea Two offshore wind farm. The company’s vessels delivered a total of 141 monopiles with weights ranging from 775 to 1285 tons and diameters ranging from 8.3 metres up to 9.5 metres over a 12-month period. The crews also delivered 131 transition pieces weighing 345 tons each with a 6.5 metre diameter.

The last delivery was completed by the crew onboard the Fairmaster, one of the two vessels from the K-class family, fitted with two 1,500-ton crane with a combined lift capacity of 3,000 tons.