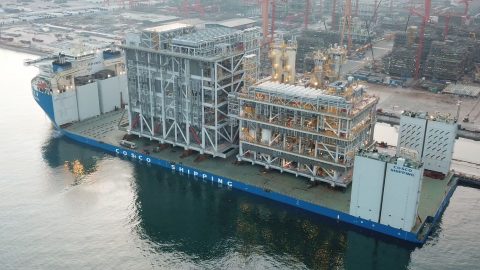 Module deliveries for the Novatek-led Arctic LNG 2 project are set to continue with COSCO Shipping Heavy Transport’s vessel Xin Guang Hua loaded at the Tianjin Port in China. The 2016-built heavy lift semi-submersible vessel is loaded with two modules for the LNG project and is yet to leave the construction yard.

First modules already reached the Murmansk LNG Construction Center in September. At the end of the third quarter of 2021, the overall progress for Arctic LNG 2 was estimated at 52 percent, and the first train was close to 70 percent being done. Each train consists of 14 modules. Once delivered, the modules are skidded onto the GBS platform.

The project utilises a construction concept of gravity-based structure (GBS) platforms to reduce overall capital cost and minimise the project’s environmental footprint in the Arctic zone of Russia. Once all modules are integrated with the GBS platform the complete structure will be towed to the western shore of the Gydan Peninsula, and placed onto the river bed in its final location. The project’s first production train is expected to start production in 2023.