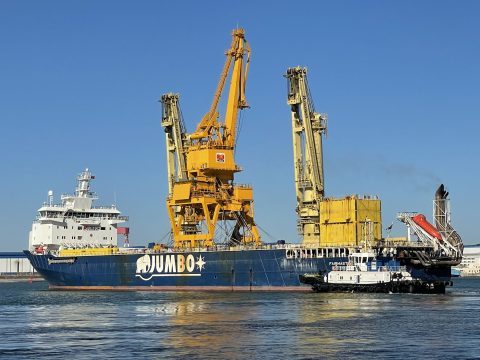 Jumbo-SAL-Alliance team has recently been hired to engineer the transportation of fully assembled crane for DHHI. The cargo had to be transported from Dalian, China to Dahej in India.

Jumbo-SAL-Alliance deployed its heavy-lift vessel Fairmaster to ship the portal crane fully assembled. In such state, the unit measured 23 metres by 17.5 metres by 63 metres and weighed 611 tonnes. The crew completed the loading in Dalian port, China in just one day before sailing to the west coast of India.

Due to the strong swell at the port of discharge in Dahej, the hooking and lifting operation was managed closely by the port captain, captain and engineers, and the lift was not completed until the rigging plan was optimised and the right conditions were achieved.

Thanks to proper pre-planning, team collaboration and an experienced crew, the loading, seafastening and offloading of this portal crane were completed smoothly and safely, Jumbo-SAL-Alliance said.