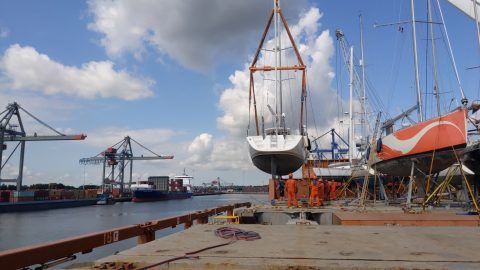 Sevenstar yacht transport successfully delivered a shipment of six sailing yachts and one motor yacht to the Matrans Rotterdam Terminal, on Streefwaalseweg in Rotterdam’s port.

Based in Amsterdam, Sevenstar Yacht Transport is a member of the Spliethoff Group. The yachts were transported aboard the Spaarnegracht, a general cargo ship built in the year 2000. The Spaarnegracht measures 168,21 metres by 25,20 metres, with a gross tonnage of 16641 tonnes.

The Spaarnegracht first sailed from Jacksonville, Florida, in the United States (US) on the 12th of June, 2022. It then sailed to the Caribbean, on the 17th of June, stopping in Saint Thomas in the US Virgin Islands, and Saint John’s, in Antigua and Barbuda.

During these stops, luxury yachts were lifted on the ship using the Spaarnegracht’s three built-in deck cranes. The cranes have a safe working load (SWL) of 120 metric tonnes (mt) at 14 metres, 90 mt at 18,6 metres, and an SWL of 55 mt at 30 metres.

The Spaarnegracht then sailed across the North Atlantic Ocean, to the Port of Southampton, its first European stop, where it arrived on July 1st. From Southampton, the ship set sail for Rotterdam’s Matrans Terminal, where it arrived in the early hours of July 4th. The unloading operations began at 8 AM on July 5th and were overseen by several Sevenstar loadmasters.

The yachts unloaded in Rotterdam include a 26.6 metre Feadship sportfish yacht, named the Patriot. This 1984 yacht was designed by Frits De Voogt and refitted over the course of fifteen months in 2005, at the Derecktor Shipyard in Florida. The Patriot yacht came from Fort Lauderdale to be loaded in Jacksonville and unloaded from the Spaarnegracht using two of its cranes. The yacht is now en route to Amsterdam, where it will be undergoing a refit, before being delivered to its new owner.

Built in 1979, the Lady Blue measures 14.00 metres by 3.90 metres and weighs 13 tonnes. The 16,3 metres long, 17-tonne, Caconano, hailing from the French island of Martinique, has been purchased and refitted by a dutchman.

Once unloaded the yachts received special permission to sail in the Port of Rotterdam. The Spaarnegracht departed from the Port of Rotterdam around 7 PM on Tuesday, headed for the Kiel Canal, a 98-kilometre-long artificial freshwater canal in Germany’s northernmost state of Schleswig-Holstein.

Sevenstar Yacht Transport has also previously arranged the shipping of a yacht for Ocean Network Express (ONE).