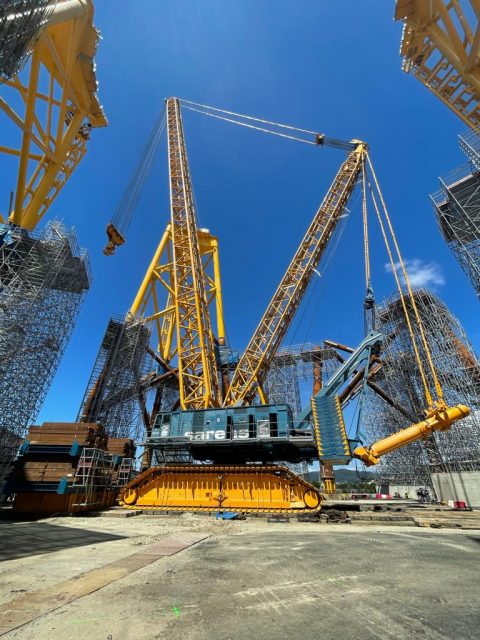 Heavy lift specialist Sarens has been tagged to work on the assembly of 62 wind farm jackets for its client Navantia, at the latter’s shipyard in Ferrol, Spain. The jackets are destined for Iberdrola’s Saint Brieuc offshore wind farm, located 16 kilometres off the coast of Brittany.

Sarens noted that once the wind farm begins operations in 2023, it will generate enough clean energy to serve 835,000 people.

Project work began in April of 2021 with the crew using the Demag CC9800 crane, one of only two such units in the world, to perform assembly work. The CC9800 will remain on site for approximately 18 months.

The CC9800 is essentially a modified CC8800, with a boom width of 4 metres instead of 3,5 metres to accommodate increased capacities. It was developed some years ago in response to increasing weight and height requirements in the wind industry. In an SSL-S3 111m configuration, the CC9800 is ideally suited to the height and weight parameters of this project, as well as the limited working area on site.

During project operation, one operator and one supervisor will work on assembling 62 jackets, lifting the 600-tonne upper part onto the lower part at a height of 70 metres. To do it, they will first hook up to the project-specific tackle equipment, including a star spreader; connect the tackle equipment to the upper part of the jacket; hook it up and attach the SL; rotate the piece and crawl into the correct position; and finally rotate the crane and lower the upper jacket segment onto the lower jacket segment. Sarens’ range of motion during operation and relocation is limited, however, by the huge on-site scaffolding towers that effectively enclose the crane at all times.

The CC9800 crane was shipped to Spain from India, a journey that took approximately 30 days. It then required approximately 20 days for offloading, transport, and assembly. Auxiliary equipment used to transport the crane from the quay to the assembly area, and to assemble it, included two telescopic cranes, three trucks, one telehandler, and one cherry picker. Four riggers and two operators performed the assembly.