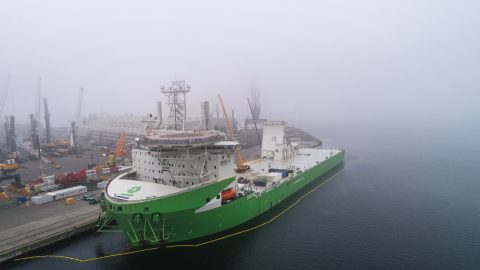 PRESS RELEASE – DEME’s new offshore vessel Orion has arrived at the Liebherr facility in Rostock where the crane manufacturer will install the biggest offshore crane it has ever constructed: the HLC 295000, capable of lifting 5,000 tonnes.

Liebherr calls it a revolutionary project as it is the first crane of this type the company has manufactured. Preparations at the site in Rostock have been immense over the past months. “Several thousand tonnes of steel have been formed, welded and assembled into a product that is unique for Liebherr”, the company states.

The boom of the new Heavy Lift Crane (HLC) 295000 is 160 metres long and once erected, the crane will have a height of 90 metres. Assembled on a huge pedestal, the crane is going to have a lifting height of up to 180 metres – almost twice as high as the Statue of Liberty in New York. With a lifting capacity of 5,000 tonnes at more than 30 metres outreach, the HLC 295000 could lift nine fully loaded A380 aeroplanes in one go.

Liebherr will install the giant HLC 295000 on the Orion using its newly developed travelling cargo crane, TCC 78000. “With its maximum lifting capacity of 1,600 tonnes and a maximum lifting height of 158 metres, the TCC 78000 is predestined for this kind of challenging operation”, Liebherr states.

Liebherr is one of the largest crane manufacturers in the world. The Group comprises more than 130 companies and employs over 46,000 people globally. In 2018, Liebherr achieved a consolidated total turnover of around EUR 10.5 billion.