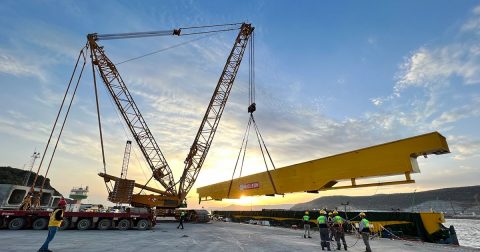 The Istanbul-based freight forwarder, Hareket, carried out the discharging and transportation of Turkey’s highest capacity overhead crane. This crane will be used to build the Mersin Akkuyu Nuclear Power Plant’s first reactor.

This crane was manufactured by Nucleon (Xinxiang) Crane, a Singaporean joint venture based in Xinxiang City, Henan Province, China.

Two pieces weighing 145 tons, and two pieces of 45 tons cargo, each measuring 58 metres in length, were lifted from barges using 600 tons of crawler cranes. They were then transferred to the self-propelled modular transporters (SPMT). One 18-axle SPMT and two 12-axle SPMTs were used in the project.

The Akkuyu Nuclear Power Plant is the largest nuclear power plant in Turkey, and is currently under construction at Akkuyu, in Büyükeceli, Mersin Province. Once completed, the plant is expected to generate approximately 10% of the country’s electricity. The first unit of the plant is expected to be completed in 2023. Rosatom, a Russian state corporation, will operate the plant.