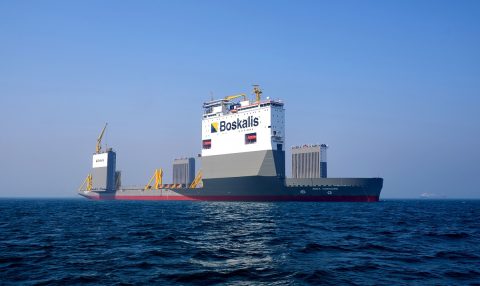 Boskalis back on track after tough first half-year

Boskalis has returned to calmer waters after a tough start of the year as a result of contractual issues in the offshore wind industry. Revenue increased slightly in the third quarter while the operating result improved considerably compared to the weak first half of the year.

For the Offshore Energy division, the third quarter was considerably better than the first half, which was severely impacted by operational and contractual issues on a limited number of projects. Revenue increased compared to the preceding two quarters, with both the contracting and services activities making a positive contribution to the operating result.

Following the first halfyear, Boskalis spoke out about the changing dynamics in the offshore wind industry. “We are being confronted with a drastically changed attitude of many of these clients. Under pressure from the disappearance of subsidies on wind farms, clients are keenly looking for ways to reduce costs”, CEO Peter Berdwoski said.

In the third quarter, the offshore wind business fared much better. Earnings were up driven by cable-laying operations and just after the close of the quarter, Boskalis was awarded a sizeable contract for two offshore wind projects in Taiwan called the Changfang and Xidao wind farms. This contract comprises the transportation and installation of 62 jacket foundations and 186 pin piles and has a value between EUR 150 to 300 million.

It was on the back of this contract Boskalis decided to invest in a new crane vessel with a lift capacity of 4,000 tonnes and 7,500 square metres of deck space. Straight after delivery the Bokalift 2 will make its debut on the wind project in Taiwan.

Utilization of the heavy transport vessels was virtually stable but according to Bosklais, “the high-end transport market is starting to show cautious signs of recovery following a number of quiet years during which transport was wholly dependent on the spot market.”

The heavy marine transport department, which operates the former Dockwise fleet, acquired an FPSO transport contract for execution before the end of the year as well as a number of long-term transport contracts for 2021 and 2022.

The offshore contractor secured over half a billion euros in new contracts in the third quarter, not including the recently awarded sizable Changfang and Xidao offshore wind project in Taiwan. At the end of September, the total order book stood at EUR 4.2 billion, which is slightly lower compared to the end of June.

Boskalis maintains its earnings forecast for the 2019 full year. The market picture for the rest of 2019 is not fundamentally different from that seen in the first nine months of the year. “Barring unforeseen circumstances, we expect a sharp profit improvement in the second half of 2019”, the company states.