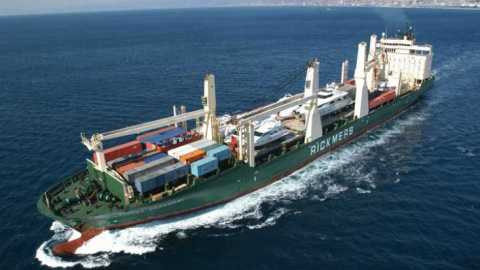 A consolidation wave is set to hit the breakbulk sector in the coming years. Consequently, larger companies will grow even bigger while smaller ones will exit the market. This according to Ove Meyer, managing partner of shipping line Zeaborn. The company is also actively involved in consolidation, as becomes evident from the very recent merger with fellow shipping line Intermarine. Ports will also feel the impact of this market movement.

For several years, rates in the breakbulk sector have been under substantial pressure. As a result, many companies are struggling to keep afloat. Meyer does not expect this to change in the immediate future. Further market upheaval, for example in the form of mergers, is therefore inevitable. Managing director Kyriakos Panayides of the Greek shipping line AAL Shipping and Peter Sandberg of industry peer SAL Heavy Lift are of the same opinion. The three industry heavyweights recently spoke at the Breakbulk Europe 2018 trade fair in Bremen.
‘The current price pressure is a killer and this will not change in the foreseeable future’, said Sandberg in Bremen. Panayides also thinks that tariffs are and will continue to be the dominant deciding factor for shippers, perpetuating the pressure on profitability that many breakbulk companies are suffering from. An unsustainable situation for many market parties.
The three pointed out the movement in the container sector as an example of a strong consolidation wave. In recent years, the container market saw unprecedented turmoil, which is sometimes also characterised as “four weddings and a funeral”. APL and UASC were among the companies absorbed by larger peers. Furthermore, there was the merger of the three major Japanese players MOL, “K” Line and NYK. The biggest upheaval however was the bankruptcy of Hanjin. Similar scenarios could also very well occur in the breakbulk sector, although they will be of a somewhat different nature.

Mergers
This is because Meyer does not expect many acquisitions to take place. He suspects that the branch will mainly downsize, through mergers and due to the fact that many smaller players will exit the market. In any case, this fits in with the “move” that Zeaborn itself has made recently. Last week, the German company announced that it wants to merge with the American company Intermarine.
Meyer emphasises that this is no takeover, although the Germans will control a majority of the shares: 75%. The remaining shares will be owned by Intermarine. Both companies will set up a new joint venture, which will be named Zeamarine. The same name will also be used for the various activities.
In essence, a rebranding is taking place in which the brand names Intermarine and Zeaborn fade into the background. Part of the fleet will be renamed as well. With the merger, both parties hope to achieve economies of scale and cost efficiency. The new merged entity has a fleet of about 75 multipurpose vessels. In this fleet, the German-American joint venture aims to strike a solid balance between ownership and charter. “Our ideal ratio is 30% owned and 70% charter. This strategy ensures that we are flexible.”

Rickmers
It is certainly not the first time in recent years that the Germans are making themselves heard. For example, Zeaborn entered into an agreement with Rickmers Holding last year, taking over part of the ship management activities from the bankrupt Rickmers shipping line. Various other deals were also made.
After the deal with Intermarine, Zeaborn will no longer participate in the wave of consolidations discussed by the three sector experts during the event. For the time being, the Bremen-based company is done with acquisitions and mergers. Further growth is to take place organically.
Meyer is also sceptical about a possible initial public offering. ‘In theory, we are too small for this. Furthermore, in view of the current situation in the stock market this is not the right time to take such a step. But if it is necessary for growth, we do not rule out a stock market listing in the long term.’

Sulphur limit
Another important development for the breakbulk sector is the upcoming sulphur limit. Starting from 2020, emission requirements will be tightened. Marine fuel may only contain 0.5% sulphur against 3.5% at present. In order to meet this obligation, shipping lines have two options: use fuel that contains less sulphur or install scrubbers that limit the emissions of ships.
The choice is not difficult for Panayides, Sandberg and Meyer. They opt for cleaner fuels and are not enthusiastic about scrubbers. ‘Especially for older vessels, scrubbers are not a viable option; it takes five to seven years to recoup such an investment’, says Meyer. In addition, fitting the existing fleet with scrubbers would be technically very difficult. For new ships, the situation however is completely different; incorporating scrubbers would indeed be an interesting option.

LNG
For the longer term, the sulphur cap is not the only environmental measure the industry will face. Earlier this spring, the International Maritime Organization (IMO) decided that the shipping sector should have halved its CO2 emissions by 2050 in comparison to the emission levels of 2008.
This target cannot be achieved with regular bunker oil. A switch to alternative fuels is therefore necessary. The three industry experts believe that liquefied natural gas (LNG) can serve as an interesting alternative here, but only for the shortsea sector. ’For longer distances, natural gas is currently not a realistic alternative’, says Meyer. ‘Because we are a globally active company and the operating radius of LNG is somewhat limited, this is not a feasible option to us. If we want to ensure that we have enough fuel on board for a really long route, we might have to allocate up to 40% of our loading capacity to LNG. That is simply not profitable.’