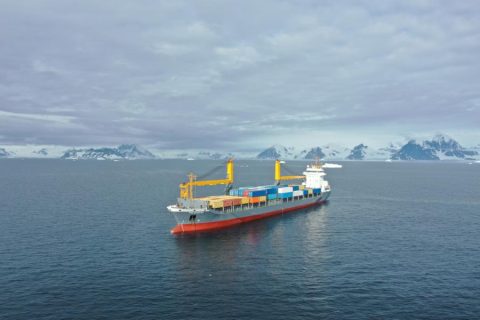 While charter rates in other shipping sectors are taking a hit, MPP rates remain firm, even though macroeconomic and geopolitical issues are concerning the industry. With the economy being on the brink of a recession the market stakeholders established a wait-and-see attitude and the market activity as well as the duration of charter contracts is declining, the Hamburg-based shipbroker Toepfer Transport noted in its latest MPP report.

Due to the long lead times for large projects, negative economic trends usually reach the MPP market with a
certain delay and some indicators give hope that the ongoing surge in demand, especially from the renewables
sector, may mitigate some of the upcoming macroeconomic pressure.

The voluntary market projection (TMI-P6 and TMI-P12) of Toepfer Transport’s TMI panelists, which estimates their sentiment about the development of the time charter rate levels, indicates a light decline of the market performance at still healthy levels. The predicted decrease of the charter rates of slightly above 10 percent only for the next twelve months, would result to rates which are still more than double of the current 10 years average.

To remind, the Toepfer Transport’s Multipurpose Index stood at $23,099 for the month of June 2022, with the July figures to be unveiled soon.

The activity in the time charter market remains low. A lot of tonnage is well employed and the few ships which
become available get offers with lower contract durations which are driven by the uncertainties the operators face
in the market. The European summer holiday season has started and may cause a further slow down and/or
delay of activity until late August.

The newbuilding prices are on a continuing rise, and Toepfer Transport analysts expect the prices to climb further. The China newbuilding price index (CNPI) is on a steep climb since the beginning of 2021.

High inflation, rising interest rates, the increasing costs for labour and equipment and the risk of a global recession
clearly indicate a further rise of the newbuilding prices. While the shipyards, especially in China, are already
under pressure of low profit margins, their only small relief is the current stronger performance of the US Dollar.
The high ordering activity from other segments (Container, Bulk) cause the available building slot to become
limited and the availability of early delivery slots is tight.

This window of opportunity to order prior to further price increases and within reasonable delivery times is small
and decisions should be made better sooner than later..

The poor availability of tonnage on the second hand market caused the prices to climb further. The owner second
hand prices once again climbed steeply quarter on quarter. The reason for this is the undersupply of buyable
tonnage, Toepfer Transport’s report reads.

For most owners there is no reason to sell their profit-making assets and the increasing newbuilding prices
will cause the second hand market to follow. It is not the time to make a good bargain.