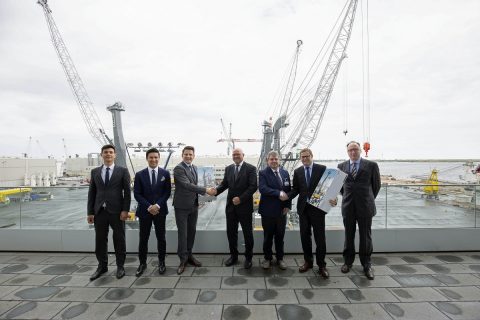 The Port of Esbjerg is gearing up for growth in the handling of high and heavy cargoes with the purchase of a new Liebherr LHM 800 crane that can lift up to 308 tonnes. ”We are experiencing a growth in high and heavy cargo, and that makes new demands on our crane capacity,” explains Dennis Jul Pedersen, Port CEO at the Port Esbjerg.

In the past four years, Port fo Esbjerg saw its number of crane tasks grow by 66%. To accommodate further growth the port is now expanding its crane capacity with what Liebherr says is the world’s largest harbour crane.

The need for the new crane is prompted by developments in the offshore industry as components for the wind turbines in the North Sea are getting bigger and bigger. However, other industries at the port may also benefit from the crane, for example for the handling of heavy machinery and production equipment, the port authority states.

”The crane gives us much greater cargo handling flexibility. In addition to single lifts of over 300 tons, the new crane will allow us to carry out tandem lifts with two of our largest cranes together lifting up to 448 tonnes,” says Pedersen.

The scale increases in the offshore wind industry will be one of the key topics of the Project Cargo Summit, a two-day international conference about the transport of large and heavy cargoes, which is organised by Promedia Group on the 11th & 12th of September, 2019 in Rotterdam. For more information about this dedicated project cargo and heavy-lift event, please visit www.projectcargosummit.com.