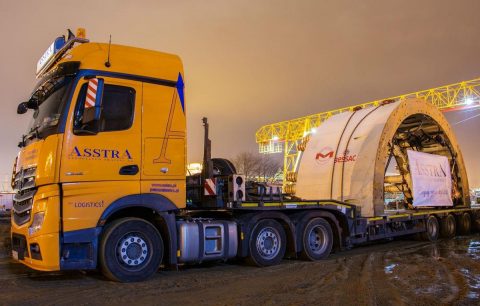 Ukraine’s heavy cargo market is growing as a result of increased industrial activity and the recovery of the Covid-19 pandemic. Helped by major improvements in the nation’s infrastructure, analysts estimate the market could grow as much as 30% year-on-year.

Victoria Lukyanets, a senior representative of the heavy-lift division of freight forwarder AsstrA, says the market is actively recovering with growth being observed since the beginning of the year. The growth is partially driven by deferred demand from 2020. According to the AsstrA expert, further development of the market will primarily depend on the pandemic situation in the country. Ukraine was one of the most affected countries in Eastern Europe.

Sergey Dermenzhi, head of NT TRANS, another Ukrainian provider of project cargo transport, shares Lukyanets’ position. According to Dermenzhi, the industry has achieved serious progress in its development in recent years, helped by the improvement of local infrastructure, which is necessary for such transportations.

“In recent years, major improvements and innovations have been introduced in the transport infrastructure of Ukraine which has created safer and faster conditions for the transportation of super heavy cargo across Ukraine. Criticial in this development is the construction of new bypass roads in the country and the introduction of a ban on the transportation of project cargo at high temperatures, in order to protect existing local roads”, says Dermenzhi.

The rapid development of the industry began at the beginning of the 2000s. However, the events of 2014 significantly slowed down the development of this industry. Already in early 2015, the demand for oversized cargo transportations in Ukraine decreased by more than 45%, while many local companies have been forced to reduce staff and their fleet to stay on the market. Today, the situation has somewhat improved, while the number of orders for transportation of oversized cargo in Ukraine has significantly increased.

According to analysts’ predictions, the market could grow by at least 30% this year compared to 2020. That will be mainly due to the growth of foreign investment in mechanical engineering, mining as well as construction sectors of the country. The biggest demand is expected to be observed for inland transportations.

Particular hopes of operators are also put on the development of Ukriane’s road-building industry. The local road-building sector demonstrated strong growth rates even during the peak of the pandemic last year.

This is confirmed by Victoria Lukyanets, who said that active transportations of large construction machinery and equipment were observed in Ukraine throughout the entire last year. According to the AsstrA specialist, the majority of these transportations were carried out within the large-scale road-building project “Big Construction”, which is implemented by the Ukrainian state-owned road-building corporation Ukravtodor.

As a result AsstrA also saw strong demand in the import of machinery, with the company carrying out a number of major projects including the transport of dump trucks from the UK, excavators from Saudi Arabia and industrial equipment from Germany.