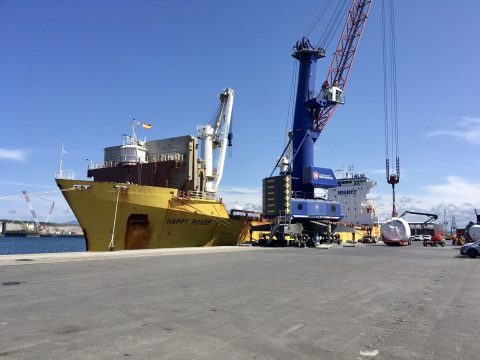 German freight forwarding company, DAKO Worldwide Transport has been kept busy by the wind project developments in the United States. The company has just completed the second of two loadings in quick succession at the port of Bilbao in Spain.

The company concluded the loading of 6,500 freight tons of wind mill equipment at the port of Bilbao, Spain. The latest loading operation follows the one concluded a week prior when the company loaded approximately 13.500 freight tons of wind mill equipment at Castellon Port, in Spain. It was the second shipment for an ongoing wind energy project located in Texas, for which DAKO is handling the components from the port of origin up to DAP jobsite in Texas, in the United States.

The project that DAKO is currently involved in Texas is the El Sauz wind power project. The project will construct, own, and operate an approximately 300MW onshore wind farm in Willacy County, Texas. Construction kicked off in early 2022 with operation scheduled to start in the last quarter of the year. The wind farm will include 67 units each with a 4.5 MW output.

According to the Happy Rover’s AIS data, the vessel is currently sailing in the North Atlantic and heading for the Port of Brownsville, Texas.

Happy Rover is a workhorse that also has a major milestone to its name. Back in 2016, it was the heavy lift cargo vessel ever to circumnavigate the North pole in one season.

With her voyage through the Northern Sea route and subsequently the North West Passage, Happy Rover achieved two important milestones. She is the first heavy lift vessel ever to have sailed these two routes within one season and she is also the first-ever vessel to use the shortest of the Northwest Passage routes, via Fury & Hecla Strait, as a transit trade lane between the Pacific and Atlantic oceans.