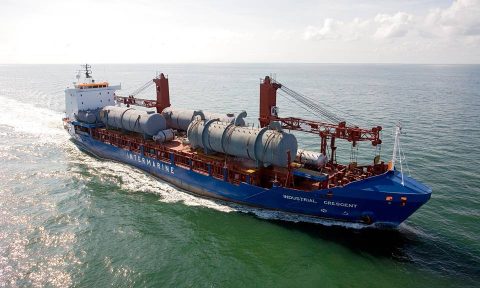 Intermarine has been resurrected as an independent shipping company as Zeamarine is spinning off its Americas business as part of the restructuring process announced in December. The company will be managed by Richard Seeg, who worked at Intermarine for over 20 years before the company was taken over by Zeaborn in 2018.

The carrier will operate 10 vessels in the 8,000 dwt range on services between the United States and South America and focus on the oil & gas, mining, power generation and wind markets, report several German and maritime media outlets.

The holding company will be named Industrial Maritime Carriers (IMC) but is yet unclear by whom it will be owned. The ownership structure of the holding company is still being addressed in the restructuring of Zeamarine, Seeg told Journal of Commerce (JOC).

The company will be operated from the existing offices in New Orleans and Houston. When exactly Intermarine will open its doors for business is not clear yet. Richard Seeg is still listed as Zeamarine’s Regional Director for the Americas and the website address Intermarine.com states the company is  “Coming soon!”

The spin-off of the US business is part of Zeamarine’s restructuring process which the company announced shortly before Christmas. Since then, the company has returned at least 17 vessels to their owners as the company is looking to cut costs. The company also brought in restructuring specialist Sven Lundehn “to realign the business strategy with the vision of the senior management.” He has replaced co-founder and managing director Jan Henrik Többe, who has left the company.

Zeamarine was formed in August 2018 as a joint venture of Zeaborn and Intermarine but in April 2019, Zeabron announced it had taken full control of the company. The goal was to operate a fleet of 100 vessels but that goal was never reached.

In December the company returned 17 of its 67 vessels back to their owners. United Heavy Lift has taken over 11 of those vessels. The other six ships will now be operated by BBC Chartering.

PCJ has reached out to Zeamarine and Richard Seeg for further details about the revival of the Intermarine brand.