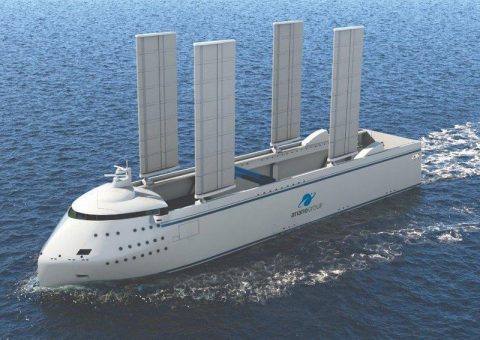 Dutch shipyard Neptune Marine has been selected to build the sailing cargo vessel Canopée, which will transport Ariane 6 rockets from Europe to the launch site in Kourou in French Guyana. The ship will feature 1,500 square meters of sails to lower fuel consumption and emissions.

The 121-metre long Canopée will be equipped with four 30-metre high Oceanwings. These sail panels will cover an area of 375 square metres each and should save around 35% on fuel consumption.

The vessel will be operated by Alizés, a joint venture of French shipping companies Jifmar Offshore Services and Zephyr et Borée which has been set up especially for this project. The company won the Ariane Group’s tender a for a new transport concept in 2019, beating among others the large French shipping company Louis Dreyfus Armateurs, which still owns this transport today. According to Alizés, the Canopée is a prototype, but it is not clear how many ships in total will be built.

Jifmar says in a press release that the ship is being built between the Netherlands and Poland, where the Neptune shipyards are located. This seems to indicate that the hull is being built in Poland and that finishing will take place in the Netherlands. The ship’s name derives from the canopy above the “Belly of Paris”, an open underground urban space on the site where Les Halles de Paris once stood.

The sailing cargo vessel has been designed as an open-top vessel with high sides to protect the cargo. Neptune involved Groot Ship Design from Groningen, the Netherlands, in the project as an open-top specialist. Detailed engineering studies have been on their way with hull tank testing scheduled for the coming weeks. The laying of the keel will follow in the second quarter of 2021, while Alizes will take delivery of the vessel at the end of 2022 after a series of tests.

Once delivered, the ship will load components of the Ariane 6 launcher in Bremen, Rotterdam, Le Havre, Bordeaux and Livourne. The Ariane 6 is the sixth generation of European launchers, which have launched satellites for decades from the Kourou launch site in French Guyana.

According to director Nils Joyeux of Zephyr et Borée, the corona pandemic played a role in the decision to build the Canopée in Europe. “The option of a European shipyard secures this project in the context of uncertainty generated by the Covid-19 and its repercussions”, he says. Until the virus outbreak, the group was in talks with shipyards in Asia and Sri Lanka, among others.

Joyeaux also hopes “this will allow Europe to take the lead in the construction of innovative vessels equipped with wind propulsion.” 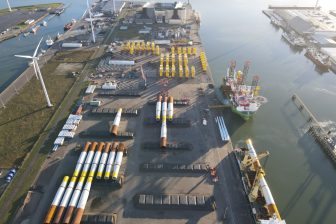