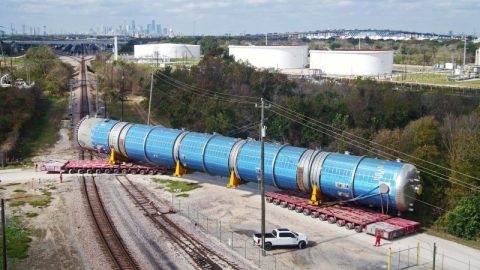 Seven reactors were shipped from Algeciras in Spain to Houston Texas. Noatum Project Cargo contracted Mammoet to transport the reactors from the ship to the final 11 kilometres to the project site: an ethylene to alkylate plant located in Pasadena, Texas.

To this end, six smaller reactors were discharged from the ship directly to Mammoet trailers. The largest piece of cargo, however, a deisobutanizer weighing 441.3 metric tonnes and measuring 60.5 metres, was offloaded from the ship by two heavy lifting barge cranes: Big John and Big T. They tandem lifted the cargo onto two double 12-line Goldhofer PST Bolster trailers on a waiting barge, which was then floated to a roll-off area.

Following roll-off, it was transported overnight to the project site for minimal traffic impact. The transport was completed efficiently and according to schedule, despite the need for problem-solving, to obtain approval from the Texas Department of Transportation. Indeed, the original transport configuration would have overloaded two bridges en route, due to an excessively small number of axles.

Additionally, adding dollies to spread out the load would make the convoy too wide for the aforementioned bridges. As a result, a third trailer was added underneath the load at the belly of the vessel, to lower axle loads, allowing for safe passage without expanding the width of the transport overall. This solution was approved by the state of Texas, and the transport was able to proceed. 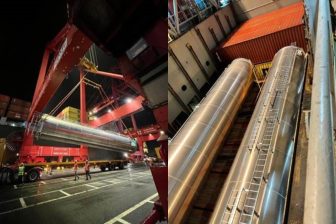 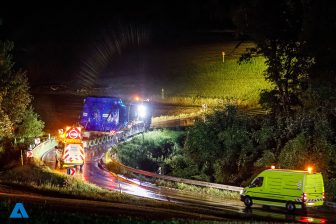 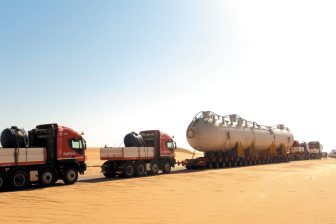