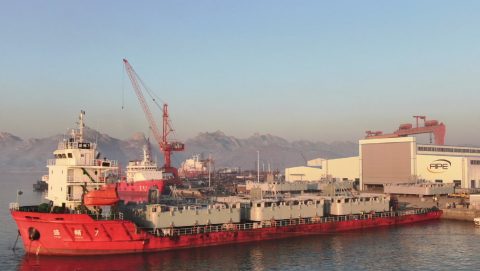 One year in the making: shipping project cargo from China to West Africa

After more than a year of planning, Bolloré Logistics China has completed the project cargo delivery from China to West Africa for its customer Process Systems. The logistics company mapped out the entire process of handling six jack-up barges for its client.

The company’s industrial projects ream faced a challenge due to the size and weight of the jack-up barges with each unit measuring 19x19x4 metres and weighing 190 tons. The volume of the cargo reached 9,200 cubic meters, equivalent to 370 TEUs. The total weight of the cargo hit 1,135 tons.

The units were moved from the Fajun Industrial Process and Equipment (FIPE) fabrication yard is located on barges to the Qingdao Port. From there, the units were loaded onto a mother vessel and shipped off to West Africa, Bolloré Logistics said in its statement.

To avoid expensive vertical lifting by using a floating crane, Bolloré Logistics decided to shift the cargos horizontally by using the hydraulic system of the self-propelled modular trailers (SPMT). The jack-up barges set up on elephant legs before being lowered onto the SPMT’s for the transfer from FIPE jetty to the barge.

Prior to the load-out Bolloré Logistics finished SPMT assembling and testing at FIPE. After cargo pre-loading survey and supervision by a third-party marine surveyor and close collaboration with each party, these cargos were then transferred in two batches from Rushan to Qingdao Port.

To optimize the cost, initially the second batch of three jack-up barges were supposed to be directly transfer to the mother vessel. However, adverse weather conditions forced the logistics company to charter a heavy lift vessel, the COSCO Shipping’s Da Cui Yun with a total lifting capacity of 400 tons to complete the operation.