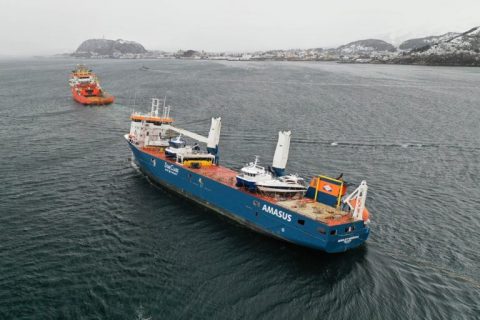 The Eemslift Hendrika safely arrived at the port on Flatholmen in Ålesund at 5 pm on 8 April. The listing ship was towed there after Smit Salvage managed to secure towing lines to two tugboats on Wednesday night. The workboat that had fallen off the ship on Tuesday, has also been salvaged.

On Monday 5 April, the Eemslift Hendrika got into difficulties due to shifting cargo, which caused it to list in a stormy sea with waves several metres high. The crew was taken off board by helicopter. Since then, the ship had been adrift in extremely bad weather and lost a workboat that was on deck. Losing the workboat improved the situation, however, as it increased the vessel’s stability, thereby reducing the risk of capsizing.

Smit Salvage was called in to salvage the vessel. During the day on Wednesday, the weather did not allow putting a crew on board the listing ship. However, after its course changed, grounding became likely and the salvage was attempted again on Wednesday evening and with success.

A Smit Salvage team of four and a rescuer from the helicopter were placed on board. The Smit team managed to connect the vessel to two tugboats, the Normand Drott and the BB Ocean, after which the vessel could be towed to Ålesund. Videos of the towage operation were released by the Norwegian Coast Guard today and can be watched below.

Norwegian news channel NRK reports that the green workboat AQS Tor, which fell from the cargo ship on Tuesday was already salvaged on Wednesday and towed to Florø. According to the news channel, it is too early to say whether the workboat, which has a value of NOK 66 million (about EUR 6.5 million), is damaged.

The Eemslift Hendrika, owned by the shipping company Amasus Shipping in Delfzijl, the Netherlands, was en route from Bremerhaven in Germany to the Norwegian port of Kolvereid. The Eemslift Hendrika was built in 2015, is 112 metres long and 17 metres wide.