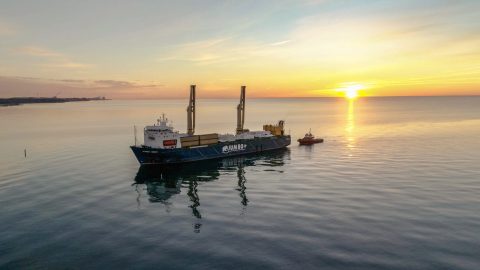 The boring machines manufactured by Herrenknecht in Germany were delivered to the the Hamilton-Oshawa Port Authority’s (HOPA Ports) Ontario ports.

The larger Scarborough subway extension TBM, weighing in at 2,000 tons with a 12-metre diameter, was taken on a two-week journey across the Atlantic onboard the heavy lift vessel Jumbo Vision. The vessel delivered the unit to the Port of Oshawa.

There the longshoremen have taken a week to unload the TBM piece by piece from the vessel. Due to the size of the TBMs they had to be loaded in pieces for final assembly at the destinations. The port’s stevedore QSL has taken over a year to coordinate the job from start to finish.

Come spring, the Scarborough TBM will begin burrowing a single 7.8km-long tunnel – from Sheppard and McCowan to Kennedy Station – clearing an underground pathway for the three-stop Scarborough Subway Extension. Due for completion in 2030, the project will make it even more convenient and comfortable for Scarborough residents to travel back and forth to the downtown core.

The two smaller TBMs both 6.5 metres in diameter were delivered onboard the Federal Delta to the Port of Hamilton. The two units are destined for the Eglinton Crosstown west extension project.

The twin TBM cutter heads bound for the Eglinton Crosstown West project came through the port of Hamilton aboard the Federal Delta, handled by stevedore Federal Marine Terminals.

The Eglinton Crosstown West Extension, expected to be complete in 2030-2031, will extend the Eglinton Crosstown LRT another 9.2 kilometres farther west through Etobicoke and into Mississauga. The TBMs arriving through the Port of Hamilton will tunnel the section between Renforth Drive and Scarlett Road.