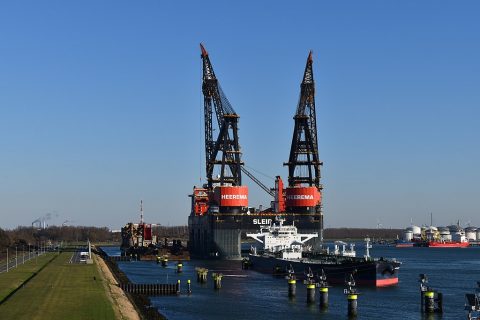 The pipe layer Amazon of offshore contractor McDermott has been undergoing an upgrade in the port of Rotterdam for several months now. This week, Heerema’s mega crane vessel Sleipnir was called in to install the new J-lay system on board.

The work took place at Royal IHC in the Calandkanaal. The existing pipe lay system was removed and replaced by a new J-lay system that can handle 1500 tonnes and lay pipelines in water depths of up to 3500 metres. The system was developed in-house by IHC.

The crane ship Sleipnir is helping to get the new system on board. The Sleipnir did not have to come from far away. It has been moored with its sister crane ship Thialf in the Calandkanaal for some time.

Initially, the Amazon was supposed to arrive at IHC in August 2019, with the retrofit to be completed in summer 2020. The ship arrived later, however, in December 2019 with the conversion also taking longer than the originally planned ten months.

Watch a video of the Sleipnir lifting the pipe-lay system on board (by Heerema Marine Contractors), the load out of the tower and loading arm (by Royal IHC) and a video explaining the Amazon’s conversion (by McDermott).

Picture: The Sleipnir in Rotterdam (by Tjaster).