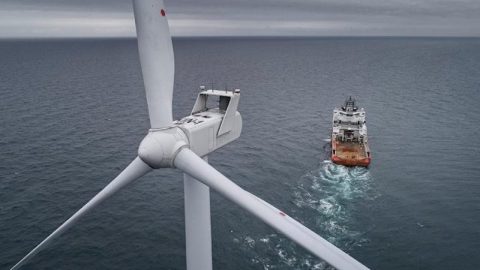 UK to quadruple its offshore wind capacity by 2030

The British offshore wind industry is celebrating a ‘landmark’ Sector Deal with the government which will lead to significant growth in terms of both capacity and export.

“It is the first Sector Deal for a renewable energy technology and it puts offshore wind at the centre of the nation’s clean, affordable and reliable energy system, almost quadrupling our capacity from 7.9 gigawatts now to at least 30GW by 2030, generating one-third of our electricity”, responds trade association RenewableUK.

The agreement will help to create tens of thousands of highly-skilled jobs across the UK and is expected to attract billions of pounds in investment to the country, while at the same time exports are set to increase fivefold in value to £2.6 billion a year by 2030.

The Energy and Clean Growth Minister Claire Perry said: “This new Sector Deal will drive a surge in the clean, green offshore wind revolution that is powering homes and businesses across the UK, bringing investment into coastal communities and ensuring we maintain our position as global leaders in this growing sector.

“By 2030 a third of our electricity will come from offshore wind, generating thousands of high-quality jobs across the UK, a strong UK supply chain and a fivefold increase in exports. This is our modern Industrial Strategy in action.”

‘The Sector Deal builds on the UK’s global leadership position in offshore wind and seeks to maximise the advantages for UK industry from the global shift to clean growth, consistent with the Clean Growth Grand Challenge’, the UK government writes in the action plan.

It will do this by:

“This Deal will ensure that the UK maintains its leading role as an offshore wind  innovation hub, accelerating our world-class R&D in fields like robotics and AI, and cutting-edge technologies being put through their paces at our globally-renowned test facilities”, says CEO Hugh McNeal of RenewableUK.

The British offshore wind industry is pleased with the new deal.

Matthew Wright, UK Managing Director at Ørsted, said: “The Sector Deal marks the coming of age of offshore wind as both a significant part of the UK’s energy transformation and an industrial powerhouse driving economic growth.  We should see the offshore wind industry as a huge UK success story. Costs have been driven down dramatically so that offshore wind is now competitive with conventional forms of energy generation, and at the same time the sector has delivered jobs, investment and growth across northern towns and cities. Ørsted alone will have invested over £13 billion in the UK by the end of 2021.”

Julian Brown, Vice President and UK Country Manager of MHI Vestas Offshore Wind commented: “Today’s launch of the Sector Deal sets the long term context for MHI Vestas’ continued growth and job creation in the UK by putting the UK on a path to deliver at least 30GW by 2030.  Our recent investment on the Isle of Wight is already delivering on the Sector Deal ambitions, creating nearly 400 new highly skilled jobs in 2019, exporting over three quarters of our 2019 output and investing £1 million in a four-year skills programme.  I’m excited that MHI Vestas will play an important part in the UK’s offshore wind revolution in the next decade”.

John Lavelle, VP and CEO of GE’s Renewable Energy Offshore Wind business said “We welcome the UK’s Offshore Wind Sector Deal as it will bolster the industry’s growing momentum, bring confidence to the sector and help further develop the UK’s leading position in the offshore wind industry. This is a significant milestone that confirms the willingness of the UK government to continue to grow the domestic offshore wind segment aided by supportive policies to develop the supply chain and bring innovative technologies to market.”

For those interested in more details, the full Sector Deal can be read online here.