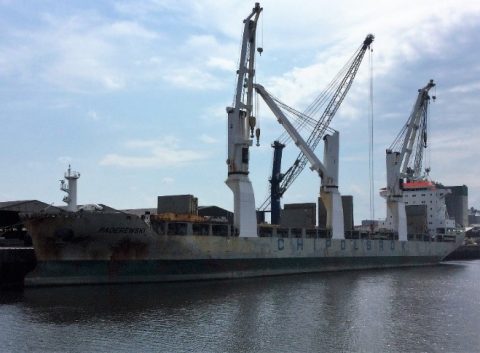 Chipolbrok, the Chinese-Polish Joint Stock Shipping Company, recently completed a series of project cargo deliveries from China to Europe. After  the European tour ended, the company’s heavy lift vessel Paderewski embarked on a project cargo tour in the south-east Asia and Far East.

Paderewski is one of the company’s four Pacific-type heavy lifter built in 2016 craned up to 700 tons and hatches
of up to 50,56 metres in length.

According to Chipolbrok, the project cargo delivery tour started at the Chinese port of Dalian and continued through Xingang, and Taicang. Paderewski the proceeded to the Vietnamese port of Phu My where its capacity was fully utilized. The vessel, loaded with a full deck of windmill towers first headed to Raahe in Finland where almost 4,400 cubic meters of cargo were discharged.

The next stop was St. Petersburg where a large portion of crane equipment, machinery, shippers own container, all together coming in at 13,500 cubic meters, and 2,600 tons of steel was unloaded. Further 3,000 tons of steel was discharged at the Polish port of Gdansk, ending the westbound voyage.

The new trip in the eastbound trade started at Hamburg where the employment list forced a stop over
at two terminals to take over 1.300 tons of machinery and equipment, mainly destined to Indonesia.

The big bang, according to Chipolbrok, happened at Antwerp where the vessel loaded a total of 21.400 tons of mixed cargo. A lot of those were steel products, partly loaded from overside. Steel products are the company’s main commodity it ix shipping to and from Antwerp.

“For stability reasons our ships like such bottom parcels. But the importance for high paying cargo like project components, machinery and equipment is steadily increasing at Antwerp,” the company said in its statement.

This time the load included a 302-ton hammer unit, railway equipment and heavy machinery parts between 50 and 95 tons unit weight.

Ravenna and Porto Marghera in Italy made the tour in Europe complete where the vessel loaded heavy presses and accessories to Pakistan and India of abt. 3,100 tons and 3,610 cubic meters general cargo including equipment and reels of up to 164 metric tons unit weight.

The vessel will begin its discharge operation next week. It is currently sailing in the Red Sea after passing the Suez Canal. The discharging rotation starts at Karachi, followed Mundra, and Mumbai in India, Singapore, Surabaya, Indonesia, Shekou, China, Kaohsiung, Taiwan, Busan, South Korea and homeport Shanghai ending the tour in south-east-Asia and Far East.