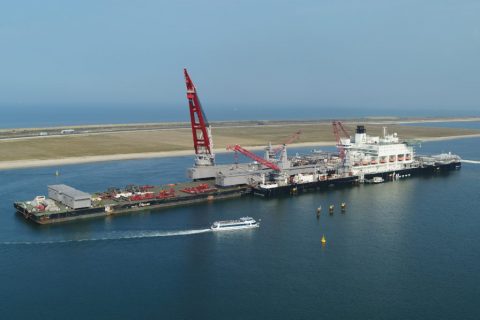 Dutch heavy lift specialist Mammoet has recently given a hand to Allseas with the transfer and installation of the new jacket lift system on the construction vessel, Pioneering Spirit. Mammoet helped with the JLS beams each weighing 5,500 tons.

During the operation, Mammoet deployed 224 axle-lines of SPMTs and two skidding systems to align and later install the structures. Allseas’ Pioneering Spirit is the largest construction vessel in the world, designed for the motion compensated, single-lift installation and removal of large offshore platforms and the installation of record-weight pipelines.

The JLS arrived in Rotterdam in September after a week long tow from the fabrication yard in northern Italy. The 170-m hinged beams with integrated tail extensions, which lift and support jacket structures were towed onboard the Allseas’ cargo barge Iron Lady.

The installation of the JLS beam on Pioneering Spirit’s main deck was completed at the end of September, two and a half years after the first steel was cut. In addition to the beams, many other systems and components manufactured across the globe were finalised over the past few months. These include the ballast box frame by Carope (China), the main hoist blocks by Asturfeito (Spain) and the grillages by Remazel (Italy) are all on their way to Rotterdam. Delivery of these items kicks-off the final installation phase on board Pioneering Spirit. 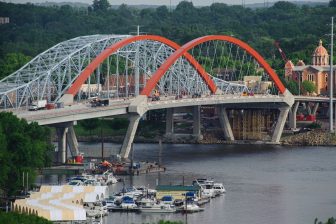