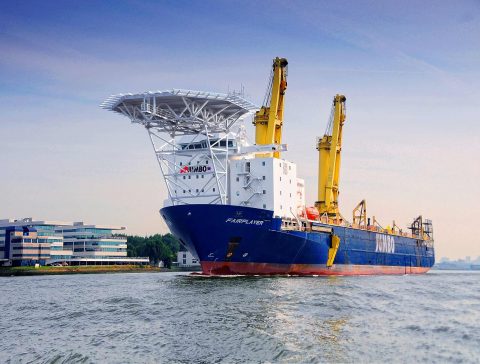 A new coalition formed by more than 70 shipping companies, ports and energy suppliers wants commercially viable zero-emission vessels to be operating along deep-sea trade routes by 2030. The Getting to Zero Coalition unveiled its plan at the UN Climate Action Summit in New York.

The coalition says that its strategy is closely aligned with the Initial Greenhouse Gas Strategy of the International Maritime Organisation (IMO), but it strives for the most ambitious version of it.

The IMO last year agreed that the shipping industry must reduce its total annual greenhouse gas emissions by at least 50% by 2050, compared to levels of 2008, whilst pursuing efforts towards phasing them out as soon as possible in this century. The Getting to Zero Coalition focuses on the latter, wanting to phase out greenhouse gas emissions as early as 2030.

“The Coalition is committed to making this ambitious target a reality by getting commercially viable deep-sea zero-emission vessels powered by zero-emission fuels into operation by 2030,” the coalition partners state.

The alliance has been formed by the Global Maritime Forum, the Friends of Ocean Action, and the World Economic Forum and is supported by more than 70 public and private organizations, including Maersk, Wallenius Wilhelmsen, Norden, DFDS, Shell, Vestas, Siemens Gamesa, Wartsila and MAN.

The coalition is supported by a wide range of shipping companies, but noticeably absent from the members list is the project cargo industry. None of the large multipurpose or heavy-lift companies has joined the coalition, which is surprising considering that many of their large customers have.

Wallenius Wilhelmsen is one of the few project cargo shipping companies that did join the program. “Climate change requires urgent action from all industries, and we are eager to be part of the solution,” says CEO Craig Jasienski.

International shipping carries around 80% of global trade and accounts for 2-3% of global greenhouse gas emissions annually. Those emissions are projected to grow by between 50 and 250% by 2050 if no action is taken.

The Sustainable Shipping Initiative last year commissioned research by Lloyds Register and UMAS, which revealed that zero-emission vessels need to be entering the world’s fleet by 2030 in order to reach the Paris climate goal of limiting global warming to 1.5°C.

The research also showed “that advanced biofuels represent one of the more economically feasible options in the short, medium and perhaps long term, amongst a possible range of low and zero carbon fuels for the shipping industry.”

In that respect, Jumbo Maritime is one of the shipping companies that are leading the way as it recently started testing biofuel aboard its heavy-lift vessel Fairplayer while carrying out a decommissioning contract in the North Sea.

“Jumbo has been developing pioneering solutions for ocean transportation for more than 50 years with sustainable innovation being one of our top priorities. By testing the biofuel oil, we are taking a major step towards a sustainably powered fleet,” commented Wout Janssens, Director Operations & Engineering at Jumbo, in response to the test.

Goodfuels Marine, who supplied the biofuel to Jumbo, said the test project paves the way for a greener offshore support industry. That initiative must be welcomed by Shell, one of the big names within the Getting to Zero Coalition.

In response to the launch of the coalition on Monday, Shell’s CEO Ben van Beurden said: “Decarbonizing maritime shipping is a huge task with no simple answer, but it has to be done. We intend to be part of the long-term, zero-carbon solution by seeking out the most feasible technologies that can work on a global scale. Starting now is essential because ships built today will stay on the water for decades.”